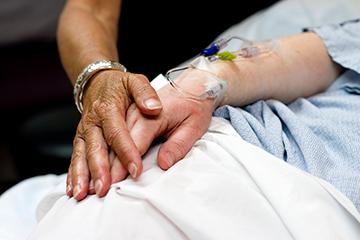 A Sparrow stroke Patient left unable to communicate was given renewed ability to talk and interact with others thanks to the innovation and compassion of Caregivers from Sparrow’s IT Department.

The Patient was completely aware of his surroundings but his Broca’s Aphasia – which affects the language-dominant area of the brain -- left him extremely frustrated.

That’s when his medical team reached out to Sparrow IT, hoping there were technology options that could help the Patient “talk” again.

“I wasn’t sure if it was a possibility because it was on a Sunday,’’ Nemets said. “They were great … not only was it a possibility but they went above and beyond.’’

The IT Caregivers came up with different options for the Patient to choose from, including a wireless keyboard and an IPad.

“Brian and Chad then went into the hospital on their day off and configured the laptop, keyboard and the Ipad,’’ Nemets said. “The Patient was sleeping when they arrived so they taught his Nurse how to use each. That Monday, his speech pathologist began using the iPad to communicate with him. It was the first time something good had happened to this Patient in need in some time.’’

Following this success, Nemets said she and Beauchine have begun researching apps that could help other Patients at Sparrow with similar situation.

“Even if you work in IT,’’ she said. “You can still positively impact our Patients every day. Brian and Chad have always been very focused on how to best solve issues and this Patient even helped us to learn from his experience.’’