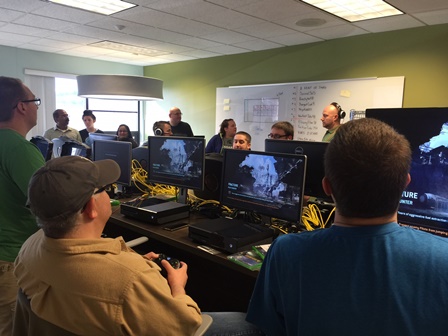 The gamers had raised $28,190 for Sparrow by the end of the marathon, but finalized numbers are expected to be closer to $30,000.

Extra Life is an annual online gaming event founded in 2008 to honor the memory of a CMNH Patient in Texas. It has grown to be a large charitable effort in the video game world and drives awareness and donations for CMN Hospitals throughout the U.S. and Canada. During the last several years Extra Life has raised over $14 million for CMN Hospitals. This year’s nationwide marathon raised a grand total of $6,680,939 for CMN Hospitals across the country.

The three Sparrow IT teams included Caregivers from three different Sparrow Health System IT facilities. The MSU Game Developers team included students and members of SpartaSoft, an MSU game development student group. All the teams will continue to accept donations through the end of the 2015 campaign on Dec. 31.

All CMNH donations in the Mid-Michigan region stay with Sparrow to benefit our friends and neighbors. These gifts help build and strengthen the programs and facilities that give our young Patients the best care possible right here where we live, work and play. When you make a pledge to the Sparrow Children’s Center, you're providing support and hope to children in our region, especially to those who may otherwise be unable to pay for their treatments and services. Your gift can change the lives of local children.