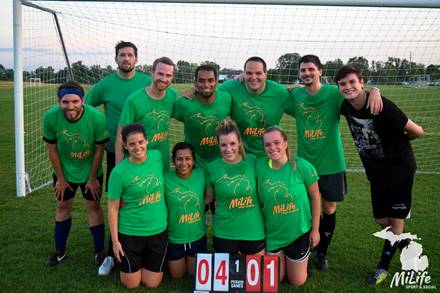 Several Caregivers from Sparrow Information Technology (IT) finished first by winning the Most Social award in a local co-ed soccer league.

The team, accurately named iKick, drew its roster from a range of IT teams and participated in a seven-week soccer competition hosted by MiLife, a local co-ed sports organization. The sports league not only focuses on competition, but also celebrates getting out, being active, and socializing through the lens of sport.

The experience brought together 13 Caregivers of various soccer skill levels. From first-time players to their “Messi-like” forwards, the team got out together each week for games and regular practices while having fun and promoting an active lifestyle.

While iKick ended their season with only two wins, they won the hearts and minds of their competitors who voted them most social out of 12 teams. 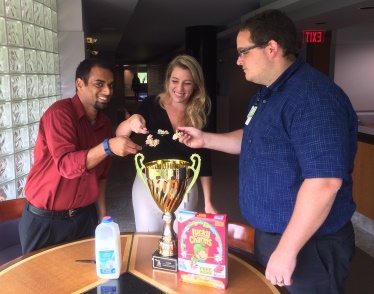 iKick walks away with an expenses-paid social outing and a two-foot golden trophy which you may spot them carrying around, hoisting above their heads randomly, drinking coffee from or storing candy within. While the team must return the trophy in the coming weeks, their team name will be inscribed on it for eternity.