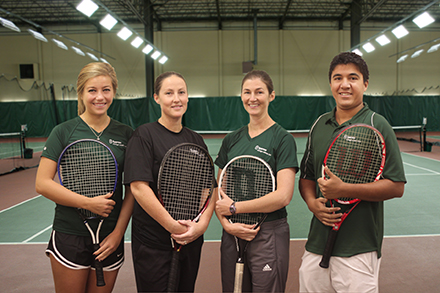 Tennis standouts Rebecca Bond, Joey Farias, Katarina Lingl, and Katie Miness have brought their wealth of teaching experience and love for the game with them as the newest additions to the Sparrow Michigan Athletic Club (MAC) fitness staff.

“We are so excited for our members to have access to such talent in this great new team of tennis pros,” said Nicole Brillantes, Sparrow Michigan Athletic Club Membership Services Manager.

Rebecca Bond, a nationally ranked junior in Australia, came to Eastern Michigan University where she played no.1 singles and doubles. Rebecca has taught in the U.S. and Australia and also assists the Varsity Girls Tennis program at Okemos Public Schools.

Joey Farias hails from Corpus Christi, Texas, where he was a nationally ranked junior. Farias went on to play college tennis at Abilene Christian University and Texas A&M. He was the Head Academy Pro at a premier tennis academy in Corpus Christi and served as the Head Women’s Tennis coach at Texas A&M Kingsville.

Katie Miness joins the MAC after seven years as an Assistant Tennis Professional at the Charlotte Country Club in North Carolina. Katie has experience working with players of all ages and levels, and she is passionate about instruction with those who are new to the game. Katie was a four-time state champ in high school and played collegiate tennis at Carson-Newman University in Tennessee, where she was nationally ranked in doubles. Miness holds United States Professional Tennis Association (USPTA) and Professional Tennis Registry (PTR) certifications.

Katarina Vella Lingl was born and raised in Rochester Hills where she fell in love with tennis at the age of three and never looked back. Lingl was ranked number one in the state of Michigan as a high school junior and went on to USTA tournaments. In 2010 she joined the Michigan State University Tennis team where she excelled. As team captain she led the team to the second best season in program history. Lingl started coaching at age 15, including Nike Tennis Camps and most recently the Meadow Club of Southampton in New York. Lingl received her PTR certification in 2014.