Sparrow opens new doors in the fight against cancer 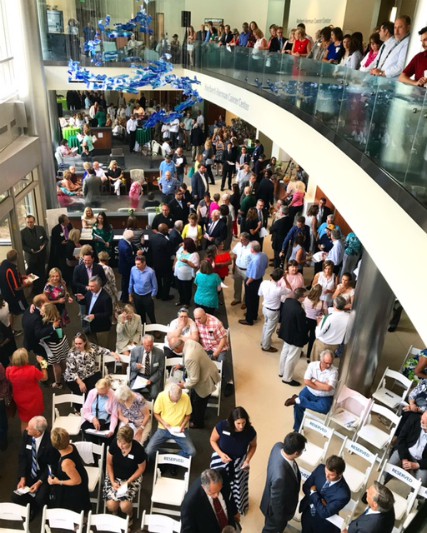 LANSING, MI – In an emotional and touching ceremony today, Sparrow dedicated the new Herbert-Herman Cancer Center, a milestone for the mid-Michigan region in providing world-class treatment here at home with no need to go anywhere else.

The facility – which has been years in the making – was christened in front of hundreds of attendees during a 35-minute ceremony that featured donors, cancer survivors, and leaders from Sparrow and the Mayo Clinic Care Network. Following a ribbon cutting, tours were held of the striking glass building that sits across from Sparrow Hospital on Michigan Avenue in Lansing. The Herbert-Herman Cancer Center opens to Patients on Monday, July 17.

Opening the building for public tours, and later for an open house for cancer survivors, was important since community members played such an important role in establishing the Herbert-Herman Cancer Center. The community contributed nearly $8.3 million toward the new Cancer Center, which has allowed Sparrow to create a world-class healing environment for the mid-Michigan region.

The ceremony was highlighted by remarks from the building’s namesakes and lead donors, James and Judith Herbert and James Herman, M.D., and wife Susan, who have been extraordinarily generous to the project.

“There has been community involvement in this project from the beginning,” said James Herbert, who, like his wife, is a cancer survivor.

“We owe our lives to God, our family, and the Sparrow Cancer Center. We are so humbled and grateful to be part of this,” said Judith Herbert.

Dr. Herman, a famed Oncologist who is Director of the Sparrow Herbert-Herman Cancer Center, noted that while the facility is dazzling, “we expect the Patient to be the only focus in this building. To Patients, we promise to bring our continued dedication and passion to your care.”

Said Susan Herman, who noted that her family, like so many others, has been touched by cancer: “The Center is amazing. People will get Patient-centered fabulous care here.”

Onlookers were impressed by the Patient-friendly and open building design -- which includes numerous innovations to improve care and protect Patient privacy -- and by the spectacular all-original art from Michigan artists.

But several speakers noted that the real mark of the Herbert-Herman Cancer Center will be the innovative care provided inside the building by exceptional Sparrow Caregivers.

“The facility is truly impressive in design, appearance and functionality. However, the significance of this initiative is far greater than the construction of a beautiful building. More important, the Center reflects the quality of our Physicians, Nurses, Technologists, Support Staff and Volunteers.”

The Herbert-Herman Cancer Center will feature a multi-disciplinary team approach that puts the Patient at the center of everything we do. Patients will see a team of clinicians under one roof and in one visit, rather than making separate appointments with specialists from different practices. Each Patient will receive an individualized treatment plan with input from numerous specialists. Each major cancer has its own clinic, such as breast, lung, and colorectal cancer.

Sparrow’s comprehensive relationship with Mayo is making a difference in the lives of our Cancer Center Patients every day. Our oncologists participate in eTumor boards with Mayo Clinic cancer specialists daily, discussing and evaluating cases, and Sparrow oncologists consult directly with Mayo surgeons. Mayo second opinions are available to our Patients without the need to travel.

Sparrow and Mayo recently celebrated the fifth anniversary of Sparrow becoming the first health system in Michigan, and fifth in the nation, to become a member of the Mayo Clinic Care Network. The relationship allows Sparrow direct access to Mayo Clinic’s professionals, protocols and processes.

“We have worked closely with Sparrow during the past five years. And we’re excited to continue that collaboration in this facility,” said David Hayes, M.D., Medical Director of the Mayo Clinic Care Network. “We know that extending knowledge and expertise benefits the Patient. By working together, more Patients are able to stay close to home with peace of mind.

“To date, hundreds of Sparrow Patients have benefited from the collaboration of Mayo Clinic and Sparrow specialists. And it’s just the beginning.”

The Herbert-Herman Cancer Center is about twice the size of the current 28,000-square-foot Cancer Center located at Sparrow Hospital. The design includes an open, light-filled area for Patients receiving chemotherapy treatment; conference rooms equipped with technology to communicate with Mayo specialists; a retail boutique; rooms large enough to accommodate families accompanying a Patient; and space for support groups, among many innovative features.

It will include three linear accelerators, which customize high-energy X-rays to a tumor’s shape and destroy cancer cells while sparing surrounding tissue.