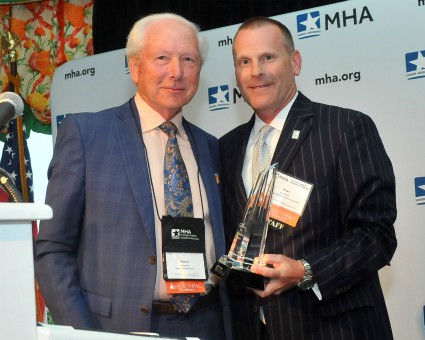 Receiving the association’s highest achievement award, the 2017 Meritorious Service Award, were Dennis Swan, president and CEO, Sparrow Health System, Lansing, and James Bogan, who recently retired from his position as regional president, UP Health System, and resides in Houghton. The association’s 2017 Special Recognition Award was presented to Elizabeth Schnettler, the recently retired president of the Hospital Council of East Central Michigan who resides in Au Gres, and Michigan Sen. Mike Kowall (R-White Lake). The awards were presented during the MHA Annual Membership Meeting held this week.

Swan became Sparrow’s president and CEO in June 2005, after serving as interim president since November 2004. Under Swan’s leadership, Sparrow has made numerous quality and research improvements and will soon open the Sparrow Herbert-Herman Cancer Center in Lansing. Sparrow became the first Michigan health system to become a member of the Mayo Clinic Care Network in 2012, offering Mayo Clinic expertise and clinical care resources. Sparrow Hospital has been redesignated as a Magnet hospital, signifying nursing achievement and excellence. The health system has broadened its collaborative regional approach to include Sparrow Clinton, Carson and Ionia hospitals and last year formalized an affiliation with Hayes Green Beach Memorial Hospital, Charlotte. It also is part of a joint venture with Mary Free Bed Rehabilitation Hospital, Grand Rapids. Swan has helped spearhead numerous facility improvements in addition to the new Cancer Center. He was instrumental in the formation of Affirmant Health Partners, the state’s largest clinically integrated network.

Swan was involved in various MHA committees even before he was Sparrow’s CEO. He then joined the MHA Board of Trustees as an at-large member in 2005 and served continuously for nine years. He was a member of the board’s executive committee from 2011 through 2015 and was board chair during the 2013-2014 program year. Swan chaired the MHA Health Foundation Board of Directors in 2014-2015 and is currently a board member. He has chaired the MHA Health Information Strategy Committee and just completed a term as chair of the MHA Legislative Policy Panel. Swan has also represented hospitals on the American Hospital Association Region 5 Policy Board.

Bogan was CEO of the former Portage Health, Hancock, for 24 years and was instrumental in developing the plan that united Portage Health, Marquette General Health System and Bell Hospital, Ishpeming, and formed the UP Health System in 2014. As the first regional president of the new health system, Bogan understood the importance of building strong relationships with employees and medical staff and was a strong and consistent leader who always acted with the best interests of the hospitals’ employees and communities in mind.
During his career, Bogan has overseen more than $400 million in capital projects, including the construction of a $29 million facility in Hancock that opened in 2000. He also was very involved in the planning and beginning phases of the replacement facility that is currently under construction in Marquette. The 500,000-square-foot, 265-bed hospital will be flanked by an 80,000-square-foot medical office building, both of which are expected to be completed in November 2018.

Bogan also has been a consistent leader within the MHA. He represented the Upper Peninsula on the MHA Board of Trustees during both the 1997-1998 and 2009-2010 program years. He served on the MHA Task Force on Medicaid and Payer Issues in 2000-2001 and was part of the advisory committee for the Health Political Action Committee in 2003-2004. Bogan served on the MHA Small or Rural Hospital Council for eight years and on the MHA Legislative Policy Panel for nine, two of them as chair.

Schnettler was presented with the MHA Special Recognition Award for her long service to the Hospital Council of East Central Michigan (HCECM) and her significant contributions in support of Michigan’s small and rural hospitals. She joined the HCECM and its affiliates, the East Central Michigan Healthcare Foundation and the Health Care Alliance Pool, in 2000. For 16 years, she oversaw strategy, marketing, education forums and promotion for the companies, their member hospitals and provider physician organization and advocated on their behalf.

Schnettler has dealt extensively with diverse stakeholders to build consensus on solutions for healthcare workforce issues and public healthcare policy priorities. She has worked with employer groups to design health benefit plans and administration and recently assisted the Michigan Health Improvement Alliance, Inc., on initiatives to improve the health of communities across a 14-county region of mid-Michigan. She has effectively supported the specialized interests of the nine critical access hospitals in the East Central Region, including four small or rural hospitals.

Kowall has tirelessly supported the healthcare community and recognizes the economic value that hospitals bring to Oakland County and the state. He introduced Public Act 500 of 2016 to give medical research and medical tourism facilities access to the Transportation Economic Development Fund, which was created to help the state compete in an international economy and stimulate economic growth and to improve the quality of life in rural and urban areas.

The senator introduced Senate Bill (SB) 1019 in 2016 to allow certified registered nurse anesthetists to administer anesthesia without physician supervision. As passed by the Senate, the legislation would address rural hospitals’ difficulties in recruiting and retaining anesthesiologists. The MHA has long advocated for this issue, but Kowall’s bill was the first to advance to this stage in the legislative process. Although the bill ultimately died in a House committee, Kowall’s ability to advance SB 1019 encouraged Michigan hospitals.

Kowall is one of the strongest supporters of the state’s auto no-fault insurance system in the Michigan Legislature and is keenly aware that it provides ongoing care for victims in catastrophic auto accidents. During his tenure, he has shown he is unwilling to sacrifice quality of care for accident survivors in exchange for draconian reforms to the system.

These achievements, combined with his interest in improving healthcare technology, make Kowall an asset for the entire healthcare community.

Based in greater Lansing, the MHA advocates in Michigan and Washington, DC, on behalf of healthcare providers and the communities and patients they serve. The MHA is a nationally recognized leader on initiatives that protect and promote quality, cost-effective and accessible healthcare. To learn more, visit www.mha.org or follow the MHA on Facebook and Twitter.