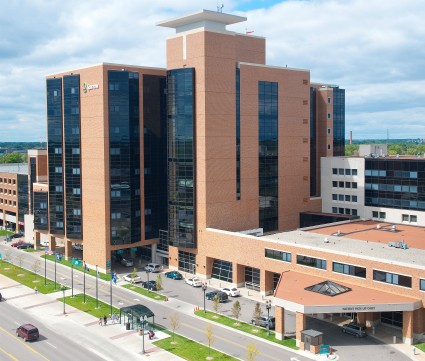 LANSING, MI – The Sparrow Tower – a symbol of Sparrow and home to much of its groundbreaking care – has been renamed the Dennis A. Swan Family Tower in honor of the health system’s recently retired longtime President and CEO. The decision – made unanimously by the Sparrow Health System Board of Directors – was revealed in a surprise announcement at a reception for Swan on Friday. “Having our family name attached to Sparrow’s ten-story Tower is far beyond anything I could have ever imagined,” a stunned Swan said. “We accept this honor with humility and profound appreciation for all past and present Physicians, Caregivers, Volunteers and Donors.” It was important that “Family” be included in the name because family is so integral to Swan. He and his wife, Kathy, live in Okemos near their daughter and son-in-law, and dote on their three grandchildren. Richard Bruner, chair of the Health System Board of Directors, said the decision was an easy one for the board, given Swan’s impact on Sparrow, and his dedication to Sparrow Caregivers and the health of people in the mid-Michigan region. “Dennis Swan was a classic servant-leader who thoroughly believed that his job was to take care of the people who take care of the people,” Bruner said. “One of the hallmarks of Dennis is that integrity is paramount to him. “We felt that the significant growth of the health system and expansion of Sparrow’s physical plant in his years of leadership could best be honored by naming the Tower after him.” Swan was given a crystal replica of the Tower, which was the single largest commitment to improving healthcare in the region when it was built in 2008. The Tower houses such programs as the Sparrow Specialty Hospital, Neurosciences Center, Cardiology, Orthopedics, and many of Sparrow’s inpatient rooms. The Tower is one of numerous achievements during a tenure in which Swan made an indelible mark on local healthcare. Swan retired Dec. 31 after nearly 38 years at Sparrow, including 14 as President and CEO. He has been succeeded by E.W. Tibbs Jr. During Swan’s years as top executive, Sparrow became a member of the Mayo Clinic Care Network; opened the Sparrow Herbert-Herman Cancer Center; formalized affiliations with MSU’s three human health colleges and with Carson City Hospital, Ionia Hospital, and Hayes Green Beach Memorial; formed a joint venture with Mary Free Bed; and achieved elite Magnet status for Nursing, among other achievements. In addition, he spearheaded the formation of Affirmant, a statewide Population Health Collaborative that is having a far-reaching impact on healthcare throughout Michigan. Swan has received numerous awards for his business and community work and is past chair of the Michigan Health and Hospital Association, the Lansing Economic Area Partnership (LEAP), and the Capital Area United Way. Choose Wisely. Choose Sparrow.