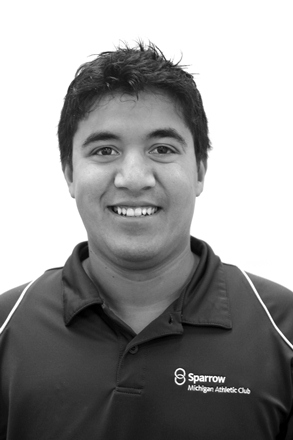 Tennis standout Joey Farias is gearing up for the fall season at the Sparrow Michigan Athletic Club (MAC), bringing his world-class coaching experience to aspiring young tennis players in mid-Michigan.

Farias, who has competed on the pro tennis tour and played and coached with some of the world’s top players, offers individual instruction at the MAC and joins with other tennis pros at the club to conduct group lessons. Under Farias’ guidance, students develop the skills needed to play competitively. Seeing the kids develop into talented players is a source of pride for the 27-year-old Texas native.

“It’s fulfilling when a kid comes back after playing in a tournament better than he has before,” Farias said. “I’m just trying to be the best coach for them.”

Farias joins fellow tennis pros Rich Thom, Rebecca Bond, Dan Howard and Karim Jelassi at the MAC. They team up with Farias on group instruction, with each teaching as many as six to seven young players. Each also offers individual lessons.

Farias, a 2009 Texas A&M graduate who joined the MAC 10 months ago, has competed against some of the top names in the sport. They include 2009 U.S. Open champion Juan Martin Del Potro, Gael Monfils (currently ranked No. 16 in the world), John Isner (No. 19), and Sam Querrey (No. 39). Farias himself was ranked No. 1 among juniors by the U.S. Tennis Association’s Texas section.

The MAC’s fall tennis program begins Aug. 31 and is open to everyone. For more information or to enroll, call the concierge desk at 517.364.8800 or watch for flyers that will be mailed in mid-August.

The MAC is a subsidiary of Sparrow, mid-Michigan’s leading health care provider, offering a full slate of health and wellness programs designed to promote well-being in the mid-Michigan region.