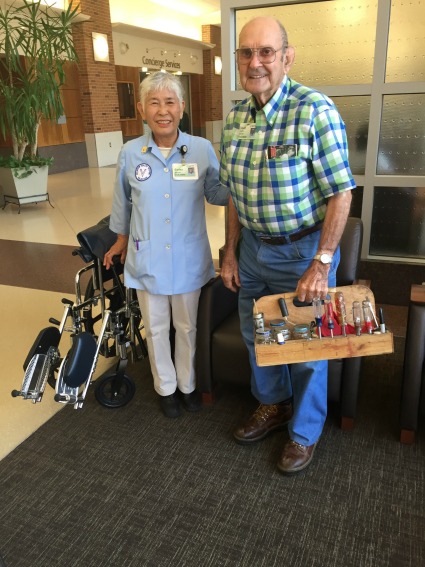 LANSING, MI – After meticulously repairing and tending to hundreds of wheelchairs, Sparrow Volunteer David Graves of DeWitt is finally rolling into retirement.

Graves, 89, has spent years tracking the hospital’s wheelchairs, sometimes using his own tools to replace parts and repair damage. Some of the work was done in a workroom he was given at the hospital, but he was so dedicated that would also tend to them at his home shop. He said he repaired about 23 wheelchairs each week.

Now, after 25 years of “paying back” to the community, Graves has packed up his tool kit and retired.

This is actually the second retirement for Graves. He joined Sparrow as a Volunteer in 1990 after stepping down from Lansing aerospace components maker AutoAir Inc. when it was sold to Technologies Corp. subsidiary Pratt & Whitney.

Graves said the switch from entrepreneur to Volunteer was his way of giving back to the community – “payback time” after a highly successful business career.

“I just wanted to contribute,” he said.

Graves assisted with discharging Patients at Sparrow until a back injury sidelined him. He decided to start fixing wheelchairs he noticed were being discarded for minor flaws and damage.

Graves painstakingly tracked each chair and monitored when they were due for checkups. In some cases, he would use parts from otherwise unusable wheelchairs. Sometimes, the repairs involved simply replacing a wheel or repairing fabric. Others were more extensive and Graves would work on the parts in his shop at home.

The key, Graves said, was to ensure the refurbished chairs met Sparrow’s safety and quality standards.

“David’s retirement is well-earned and we will miss him,” said Melissa Sherry, Director of Volunteer Services at Sparrow. “Every hospital owes David a bit of gratitude because he worked with wheelchair manufacturers and shared feedback on how they could make parts differently so the chairs could last longer.

“The manufacturers were smart and took his advice. He’s told me he process-engineered his way out of a job.”

Graves also is a former volunteer ER driver for the American Red Cross and ran the food tent for DeWitt Lions Club events.

“Life did very well for me,” he said.