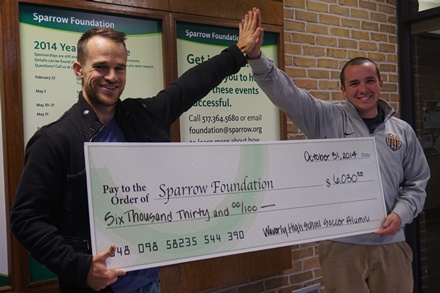 For the third straight year, alumni and current players of the Waverly High School Soccer program competed against each other to raise money for Sparrow’s Cancer Center and Hospice Services.

A check for more than $6,000 was recently presented.

The game holds special meaning for alumni Jimmy Schneidewind and Josh Gladney. Gladney’s father passed away from cancer in 2011 and then Schneidewind’s mother a few months later in 2012. Both received treatment at Sparrow.

“The soccer community at Waverly has been pretty important for both of us and our parents. My mom was really involved in the program. Josh’s dad was always at the games,” Schneidewind said. “To have a fundraiser for Sparrow centered on the Waverly Soccer Club makes sense.”