The Michigan Athletic Club (MAC) offers adult basketball leagues each fall and winter for Men. The leagues take place on Sundays, with late afternoon to early evening game times. League format includes a minimum of seven league games followed by an all-inclusive post-season tournament. Three certified officials are used each game. Updated league standings, game results, and leading scorers are posted weekly. The league’s leading scorers are posted mid-season as well as at the end of the regular season. Awards are provided to the league champions.

Registration takes place the few weeks prior to the season. Returning teams get registration priority. Registrations are by whole team only. Individual registrants will be placed on a team if possible. If enough individual players sign up to form a team, and team is needed, they will form a “house team.”

Fees are $350 per team plus an additional per player fee of $15 for MAC members and $40 for guests.  For additional information on the adult basketball leagues or to be placed on the league database, please contact Director of Fitness, Nicole Simmons at 517.364.8870 or nsimmons@themac.org. 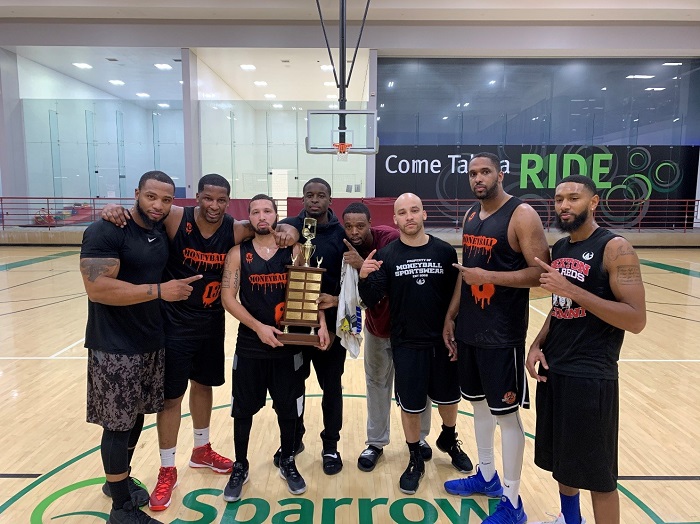 After finishing the regular-season in a 3-way tie for second place with a 5 – 2 record,   Foul or a Bucket  found themselves a 4-seed in the MAC post-season tournament.  Foul or a Bucket crushed Sitting Bull in the first round by a final of 94 – 67 behind Melvin White’s 43 points.  This first-round victory set up a round #2 showdown against regular-season undefeated champs Hagan’s Heroes.  Foul or a Bucket stunned the League Champs by a final of 68 – 60 with Derick Nelson and Melvin White knocking down 20 points each.  The 2nd round victory vaulted Foul and a Bucket into the Nov. 17th championship game against league nemesis Pizza House.  Behind Melvin White’s game-high 29 points, Foul or a Bucket would prevail yet again by downing Pizza House by a final of 73 – 61 to take home the hardware and the title of 2019 MAC Fall League Champions!  Keeping up with MAC Basketball League tradition, the team enjoyed a post-game pizza party at the Pizza House after the championship game.  The MAC Basketball Leagues will take a short break over holidays until the Winter League begins in mid-January of 2020.  Congratulations Foul or a Bucket!

Registration takes place a few weeks prior to the season. Returning teams may get registration priority. Registrations are by whole team only. Individual registrants will be place on a team if possible. If enough players sign up to form a team, and a team is needed, they will form a “house team.”

Drop-in Volleyball: We also host drop-in volleyball for members on Wednesday nights in between the end of the fall league in mid-November to the beginning of the winter league in mid-January. There may be additional drop-in opportunities after the Winter league ends in mid-March up until the weather is nice enough to move outside to the sand courts.

Beach Volleyball: After the winter leagues end in mid- to late-March be sure to check out our two state-of-the art outdoor sand volleyball courts for drop-in play during the summer months.

For Additional information on the adult coed volleyball leagues, drop-in volleyball, drop-in beach volleyball, or to be placed on the volleyball database, please contact Director of Fitness, Nicole Simmons at 517.364.8870 or nsimmons@themac.org.

Handball is often called the PERFECT sport because it helps develop strength and agility on both the left and right sides of the body. In addition, it provides benefits of interval training as players run multiple short sprints during play. Handball is both fun and effective in developing a player to their maximum ability. Playing handball at The MAC is a terrific way to develop abilities while meeting new friends and fellow handball enthusiasts.

Although there are no structured leagues, The MAC has dozens of "handball regulars" at varying levels that welcome new players. You'll typically find the group playing drop-in on Monday, Wednesday, and Friday late afternoons through early evenings as well as Sunday afternoons. The MAC also hosts periodic handball tournaments throughout the year.

The Sparrow MAC racquetball program is a wonderful way to meet fellow racquetball players who have different styles of play. The MAC has six standard "hard wall" courts. Our racquetball leagues are open to both members and non-members and provide head-to-head competition, weekly standings, playoffs, and prizes for league winners.

Each league runs approximately 15 weeks. Cost is $25 for MAC Members and $100 for guest players

The Sparrow MAC Squash League is a wonderful way to test squash skills in a league atmosphere while meeting fellow squash players with assorted styles of play. The MAC has three international "softball" courts. Our squash league is open to both members and guest players. The league provides head-to-head competition in a self-schedule format, weekly standings, playoffs, and prizes for league winners.

Each league runs approximately 10-15 weeks. Cost is $25 for MAC members and $75-$100 for guest players. The MAC also hosts periodic squash tournaments throughout the year.