Carpal tunnel syndrome is caused by pressure on the median nerve. The carpal tunnel is a narrow passageway surrounded by bones and ligaments on the palm side of the hand. When the median nerve is compressed, symptoms can include numbness, tingling, and weakness in the hand and arm.

The anatomy of the wrist, health problems and possibly repetitive hand motions can contribute to carpal tunnel syndrome.

See your health care provider if you have signs and symptoms of carpal tunnel syndrome that interfere with your normal activities and sleep patterns. Permanent nerve and muscle damage can occur without treatment.

Carpal tunnel syndrome is caused by pressure on the median nerve.

The median nerve runs from the forearm through a passageway in the wrist (carpal tunnel) to the hand. It provides sensation to the palm side of the thumb and fingers, except the little finger. It also provides nerve signals to move the muscles around the base of the thumb (motor function).

Many times, there is no single cause of carpal tunnel syndrome. It may be that a combination of risk factors contributes to the development of the condition.

There are no proven strategies to prevent carpal tunnel syndrome, but you can minimize stress on the hands and wrists with these methods:

Your provider may ask you questions and conduct one or more of the following tests to determine whether you have carpal tunnel syndrome:

Treat carpal tunnel syndrome as early as possible after symptoms start. In the early stages, simple things that you can do for yourself may make the problem go away. For example:

Other treatment options include wrist splinting, medications and surgery. Splinting and other conservative treatments are more likely to help if you've had only mild to moderate symptoms that come and go for less than 10 months. If you have numbness in your hands, you need to see a health care provider.

If the condition is diagnosed early, nonsurgical methods may help improve carpal tunnel syndrome, including:

Surgery may be appropriate if symptoms are severe or don't respond to other treatments.

The goal of carpal tunnel surgery is to relieve pressure by cutting the ligament pressing on the median nerve.

The surgery may be performed with two different techniques:

Discuss the risks and benefits of each technique with your surgeon before surgery. Surgery risks may include:

During the healing process after the surgery, the ligament tissues gradually grow back together while allowing more room for the nerve. This internal healing process typically takes several months, but the skin heals in a few weeks.

Your provider generally will encourage you to use the hand after the ligament has healed, gradually working back to normal use of the hand while initially avoiding forceful hand motions or extreme wrist positions.

Soreness or weakness may take from several weeks to a few months to resolve after surgery. If your symptoms were very severe, symptoms may not go away completely after surgery. 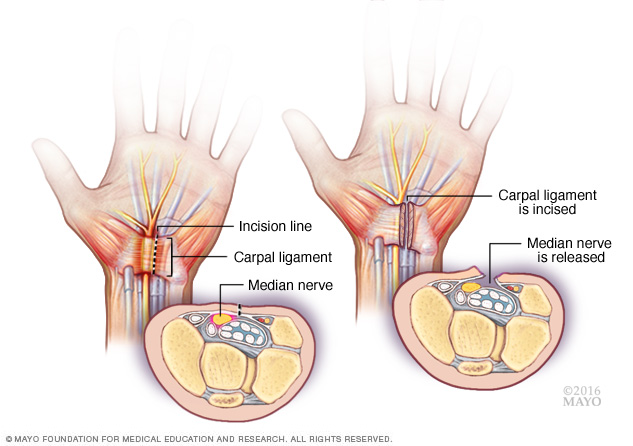 If pain, numbness or weakness recurs and persists, see your provider.

Integrate alternative therapies into your treatment plan to help you cope with carpal tunnel syndrome. You may have to experiment to find a treatment that works for you. Always check with your provider before trying any complementary or alternative treatment.

Here's some information to help you get ready for your appointment and what to expect from the provider.

Your provider will usually want to know:

If you think you may have carpal tunnel syndrome, there are some simple things you can do before you see a provider for the first time.

First, try to determine whether any activities seem to make it worse, and change how you do those or avoid them if possible. For example, if driving seems to cause symptoms, try changing the position of the hands on the steering wheel.

Also, although there is some cost involved, there is no harm in trying a wrist splint at night to see if that helps the symptoms.