Ductal carcinoma in situ (DCIS) is the presence of abnormal cells inside a milk duct in the breast.

DCIS is considered the earliest form of breast cancer. DCIS is noninvasive, meaning it hasn't spread out of the milk duct and has a low risk of becoming invasive.

DCIS is usually found during a mammogram done as part of breast cancer screening or to investigate a breast lump.

While DCIS isn't an emergency, it does require an evaluation and a consideration of treatment options. Treatment may include breast-conserving surgery combined with radiation or surgery to remove all of the breast tissue. A clinical trial studying active monitoring as an alternative to surgery may be another option. 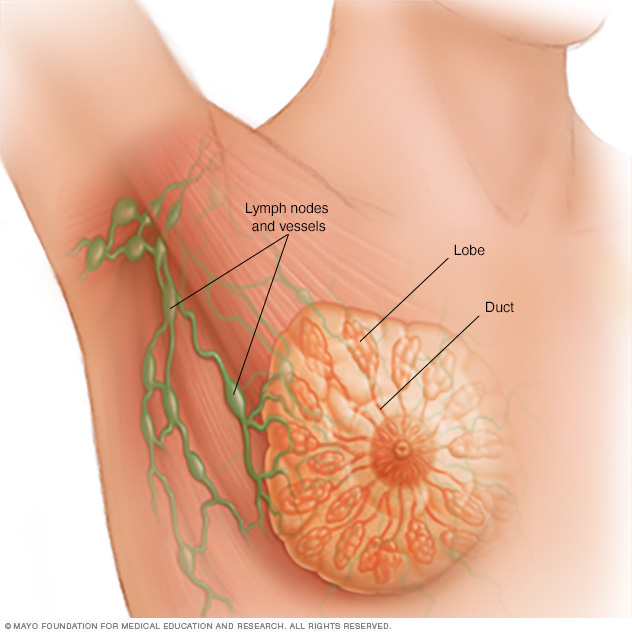 DCIS doesn't typically have any signs or symptoms. However, DCIS can sometimes cause signs such as:

DCIS is usually found on a mammogram and appears as small clusters of calcifications that have irregular shapes and sizes.

Make an appointment with your doctor if you notice a change in your breasts, such as a lump, an area of puckered or otherwise unusual skin, a thickened region under the skin, or nipple discharge.

Researchers don't know exactly what triggers the abnormal cell growth that leads to DCIS. Factors that may play a part include your lifestyle, your environment and genes passed to you from your parents.

Factors that may increase your risk of DCIS include:

DCIS is most often discovered during a mammogram used to screen for breast cancer. If your mammogram shows suspicious areas such as bright white specks (microcalcifications) that are in a cluster and have irregular shapes or sizes, your radiologist likely will recommend additional breast imaging.

You may have a diagnostic mammogram, which takes views at higher magnification from more angles. This examination evaluates both breasts and takes a closer look at the microcalcifications to be able to determine whether they are a cause for concern.

If the area of concern needs further evaluation, the next step may be an ultrasound and a breast biopsy.

In a lab, a doctor who specializes in analyzing blood and body tissue (pathologist) will examine the samples to determine whether abnormal cells are present and if so, how aggressive those abnormal cells appear to be. 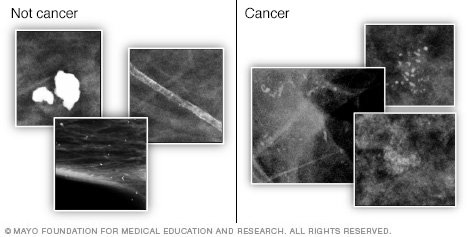 Treatment of DCIS has a high likelihood of success, in most instances removing the tumor and preventing any recurrence.

In most people, treatment options for DCIS include:

In some cases, treatment options may include:

If you're diagnosed with DCIS, one of the first decisions you'll have to make is whether to treat the condition with lumpectomy or mastectomy.

Most women with DCIS are candidates for lumpectomy. However, mastectomy may be recommended if:

Because DCIS is noninvasive, surgery typically doesn't involve the removal of lymph nodes from under your arm. The chance of finding cancer in the lymph nodes is extremely small.

If tissue obtained during surgery leads your doctor to think that abnormal cells may have spread outside the breast duct or if you are having a mastectomy, then a sentinel node biopsy or removal of some lymph nodes may be done as part of the surgery.

Radiation therapy uses high-energy beams, such as X-rays or protons, to kill abnormal cells. Radiation therapy after lumpectomy reduces the chance that DCIS will come back (recur) or that it will progress to invasive cancer.

Radiation most often comes from a machine that moves around your body, precisely aiming the beams of radiation at points on your body (external beam radiation). Less commonly, radiation comes from a device temporarily placed inside your breast tissue (brachytherapy).

Radiation is typically used after lumpectomy. But it might not be necessary if you have only a small area of DCIS that is considered low grade and was completely removed during surgery.

Hormone therapy is a treatment to block hormones from reaching cancer cells and is only effective against cancers that grow in response to hormones (hormone receptor positive breast cancer).

Hormone therapy isn't a treatment for DCIS in and of itself, but it can be considered an additional (adjuvant) therapy given after surgery or radiation in an attempt to decrease your chance of developing a recurrence of DCIS or invasive breast cancer in either breast in the future.

The drug tamoxifen blocks the action of estrogen — a hormone that fuels some breast cancer cells and promotes tumor growth — to reduce your risk of developing invasive breast cancer. It can be used for up to five years both in women who haven't yet undergone menopause (premenopausal) and in those who have (postmenopausal).

Postmenopausal women may also consider hormone therapy with drugs called aromatase inhibitors. These medications, which are taken for up to five years, work by reducing the amount of estrogen produced in your body.

If you choose to have a mastectomy, there's less reason to use hormone therapy.

With a mastectomy, the risk of invasive breast cancer or recurrent DCIS in the small amount of remaining breast tissue is very small. Any potential benefit from hormone therapy would apply only to the opposite breast.

Discuss the pros and cons of hormone therapy with your doctor.

Clinical trials are studying new strategies for managing DCIS, such as close monitoring rather than surgery after diagnosis. Whether you're eligible to participate in a clinical trial depends on your specific situation. Talk with your doctor about your options. 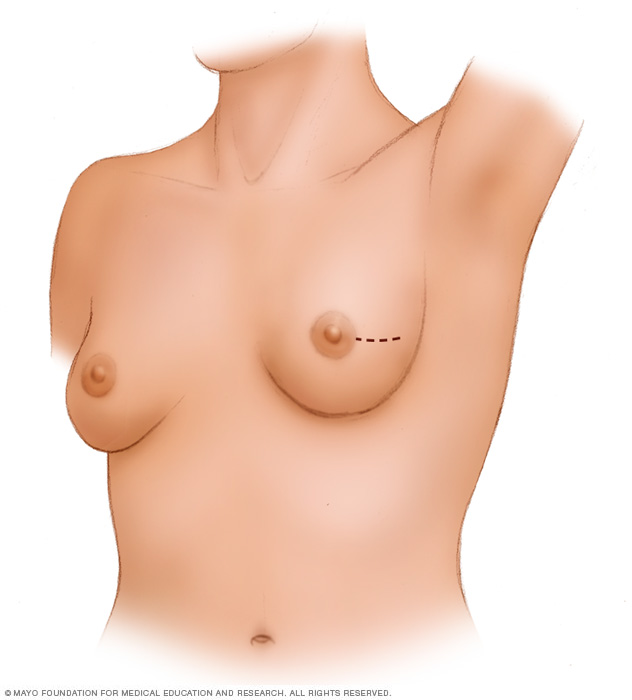 No alternative medicine treatments have been found to cure DCIS or to reduce the risk of being diagnosed with an invasive breast cancer.

Instead, complementary and alternative medicine treatments may help you cope with your diagnosis and the side effects of your treatment, such as distress. If you're distressed, you may have difficulty sleeping and find yourself constantly thinking about your diagnosis. You may feel angry or sad.

Talk about your feelings with your doctor. Your doctor may have some strategies to help alleviate your symptoms.

Combined with your doctor's recommendations, complementary and alternative medicine treatments may also help. Examples include:

A diagnosis of DCIS can be overwhelming and frightening. To better cope with your diagnosis, it may be helpful to:

Make an appointment with your doctor if you notice a lump or any other unusual changes in your breasts.

If you have already had a breast abnormality evaluated by one doctor and are making an appointment for a second opinion, bring your original diagnostic mammogram images and biopsy results to your new appointment. These should include your mammography images, ultrasound CD and glass slides from your breast biopsy.

Here's some information to help you get ready for your appointment and know what to expect from your doctor.

Below are some basic questions to ask your doctor about DCIS:

If additional questions occur to you during your visit, don't hesitate to ask them.

Your doctor is likely to ask you a number of questions. Being ready to answer them may reserve time to go over points you want to talk about in-depth. Your doctor may ask: