Kidney cancer is cancer that begins in the kidneys. Your kidneys are two bean-shaped organs, each about the size of your fist. They're located behind your abdominal organs, with one kidney on each side of your spine.

The incidence of kidney cancer seems to be increasing. One reason for this may be the fact that imaging techniques such as computerized tomography (CT) scans are being used more often. These tests may lead to the accidental discovery of more kidney cancers. Kidney cancer is often discovered at an early stage, when the cancer is small and confined to the kidney.

Kidney cancer usually doesn't have signs or symptoms in its early stages. In time, signs and symptoms may develop, including:

It's not clear what causes most kidney cancers.

Doctors know that kidney cancer begins when some kidney cells develop changes (mutations) in their DNA. A cell's DNA contains the instructions that tell a cell what to do. The changes tell the cells to grow and divide rapidly. The accumulating abnormal cells form a tumor that can extend beyond the kidney. Some cells can break off and spread (metastasize) to distant parts of the body.

Factors that can increase the risk of kidney cancer include:

Tests and procedures used to diagnose kidney cancer include:

Once your doctor identifies a kidney lesion that might be kidney cancer, the next step is to determine the extent (stage) of the cancer. Staging tests for kidney cancer may include additional CT scans or other imaging tests your doctor feels are appropriate.

The stages of kidney cancer are indicated by Roman numerals that range from I to IV, with the lowest stages indicating cancer that is confined to the kidney. By stage IV, the cancer is considered advanced and may have spread to the lymph nodes or to other areas of the body. 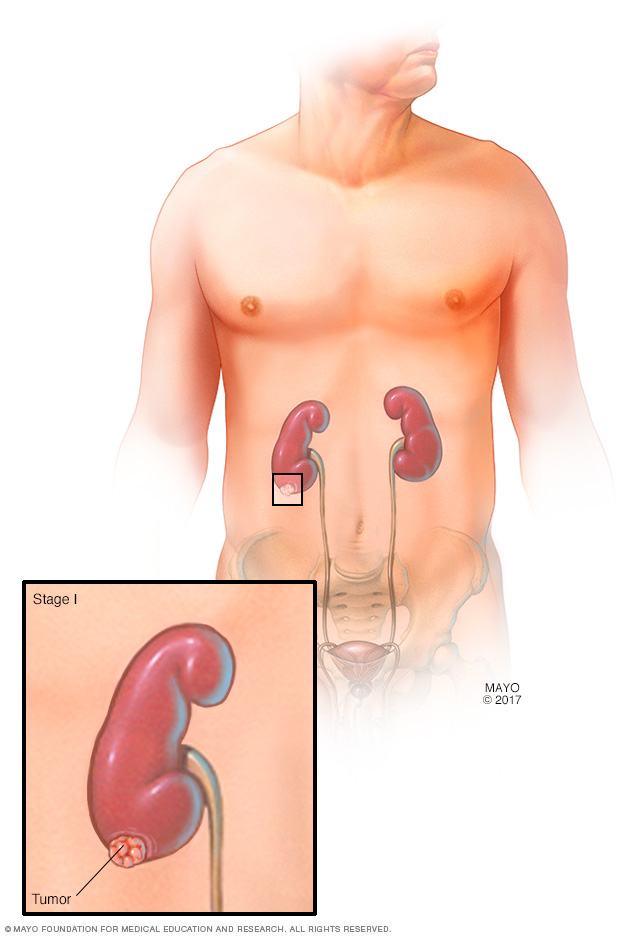 Kidney cancer treatment usually begins with surgery to remove the cancer. For cancers confined to the kidney, this may be the only treatment needed. If the cancer has spread beyond the kidney, additional treatments may be recommended.

Together, you and your treatment team can discuss your kidney cancer treatment options. The best approach for you may depend on a number of factors, including your general health, the kind of kidney cancer you have, whether the cancer has spread and your preferences for treatment.

The type of surgery your doctor recommends will be based on your cancer and its stage, as well as your overall health.

Small kidney cancers are sometimes destroyed using nonsurgical treatments, such as heat and cold. These procedures may be an option in certain situations, such as in people with other health problems that make surgery risky. 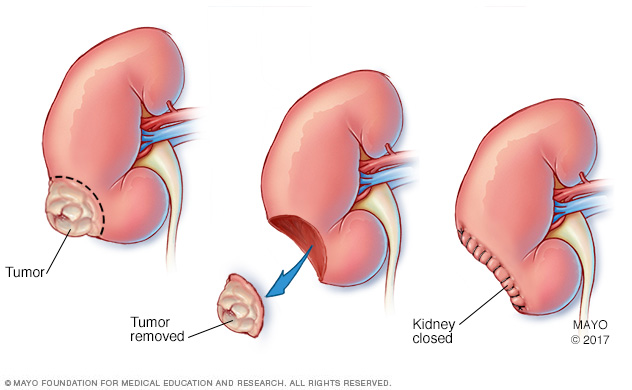 No alternative medicine therapies have been proved to cure kidney cancer. But some integrative treatments can be combined with standard medical therapies to help you cope with side effects of cancer and its treatment, such as distress.

People with cancer often experience distress. If you're distressed, you may have difficulty sleeping and find yourself constantly thinking about your cancer. You may feel angry or sad.

Discuss your feelings with your doctor. Specialists can help you sort through your feelings and help you devise strategies for coping. In some cases, medications may help.

Integrative medicine treatments may also help you feel better, including:

Talk with your doctor if you're interested in these treatment options.

Each person copes with a cancer diagnosis in his or her own way. Once the fear that comes with a diagnosis begins to lessen, you can find ways to help you cope with the daily challenges of cancer treatment and recovery. These coping strategies may help:

Start by making an appointment with your primary care doctor if you have signs or symptoms that worry you. If your doctor suspects you may have kidney cancer, you may be referred to a doctor who specializes in urinary tract diseases and conditions (urologist) or to a doctor who treats cancer (oncologist).

Consider taking a family member or friend along. Sometimes it can be hard to remember all the information provided during an appointment. Someone who accompanies you may remember something that you missed or forgot.

At the time you make the appointment, ask if there's anything you need to do in advance, such as restrict your diet. Then make a list of:

List your questions from most to least important in case time runs out. Some basic questions to ask your doctor include:

Don't hesitate to ask additional questions that may occur to you during your appointment.

Your doctor is likely to ask you a number of questions. Be ready to answer them so that you'll have time to cover any points you want to focus on. Your doctor may ask: