Peyronie's (pay-roe-NEEZ) disease is a noncancerous condition resulting from fibrous scar tissue that develops on the penis and causes curved, painful erections. Penises vary in shape and size, and having a curved erection isn't necessarily a cause for concern. But Peyronie's disease causes a significant bend or pain in some men.

This can prevent you from having sex or might make it difficult to get or maintain an erection (erectile dysfunction). For many men, Peyronie's disease also causes stress and anxiety. Penile shortening is another common concern.

The curvature and penile shortening associated with Peyronie's disease might gradually worsen. At some point, however, the condition typically stabilizes after three to 12 months or so.

Pain during erections usually improves within one to two years, but the scar tissue, penile shortening and curvature often remain. In some men, both the curvature and pain associated with Peyronie's disease improve without treatment.

See your doctor as soon as possible after you notice signs or symptoms of Peyronie's disease. Early treatment gives you the best chance to improve the condition — or prevent it from getting worse. If you've had the condition for some time, you may wish to see a doctor if the pain, curvature, length or other deformities bother you or your partner.

The cause of Peyronie's disease isn't completely understood, but a number of factors appear to be involved.

It's thought Peyronie's disease generally results from repeated injury to the penis. For example, the penis might be damaged during sex, athletic activity or as the result of an accident. However, most often, no specific trauma to the penis is recalled.

During the healing process after injury to the penis, scar tissue forms in a disorganized manner. This can lead to a nodule you can feel or development of curvature.

Each side of the penis contains a spongelike tube (corpus cavernosum) that contains many tiny blood vessels. Each of the corpora cavernosa is encased in a sheath of elastic tissue called the tunica albuginea (TOO-nih-kuh al-BYOO-JIN-e-uh), which stretches during an erection.

When you become sexually aroused, blood flow to these chambers increases. As the chambers fill with blood, the penis expands, straightens and stiffens into an erection.

In Peyronie's disease, when the penis becomes erect, the region with the scar tissue doesn't stretch, and the penis bends or becomes disfigured and possibly painful. 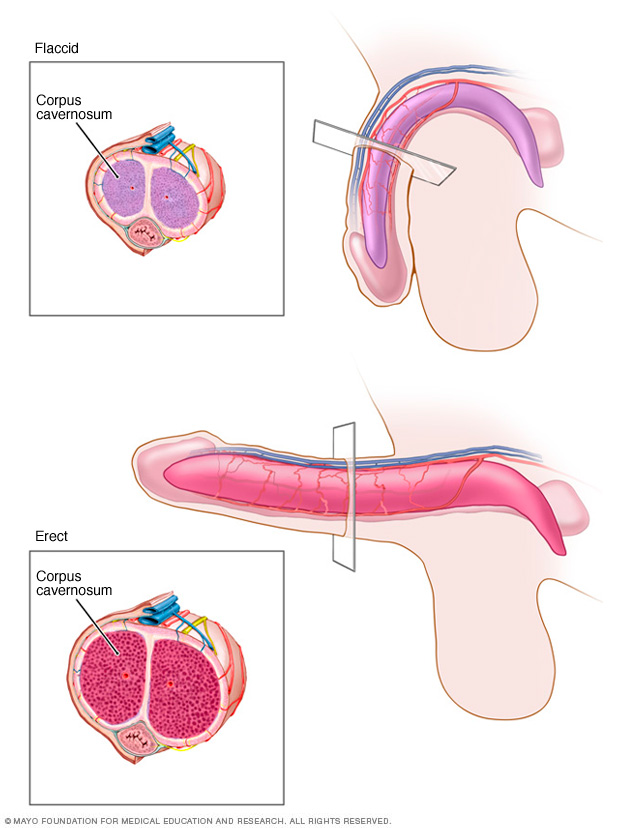 Other factors — including certain health conditions, smoking and some types of prostate surgery — might be linked to Peyronie's disease.

A physical exam is often sufficient to identify the presence of scar tissue in the penis and diagnose Peyronie's disease. Rarely, other conditions cause similar symptoms and need to be ruled out.

Tests to diagnose Peyronie's disease and understand exactly what's causing your symptoms might include the following:

Treatment recommendations for Peyronie's disease depend on how long it's been since you began having symptoms.

For the acute phase of the disease, treatments range from:

For the chronic phase of the disease, several potential treatments are available. They may be done alone or in combination:

A number of oral medications have been tried to treat Peyronie's disease, but they have not been shown to be effective consistently and are not as effective as surgery.

In some men, drugs injected directly into the penis might reduce curvature and pain associated with Peyronie's disease. Depending on the therapy, you might be given a local anesthetic to prevent pain during the injections.

If you have one of these treatments, you'll likely receive multiple injections over several months. Injection medications may also be used in combination with oral drugs or traction therapies.

Penile traction therapy involves stretching the penis with a self-applied mechanical device for a period of time to improve penile length, curvature and deformity.

Traction therapy is recommended in the early phase of Peyronie's disease. It's the only treatment shown to improve penile length. Traction therapy may also be used in the chronic phase of the disease, combined with other treatments or after surgery for a better outcome.

Your doctor might suggest surgery if the deformity of your penis is severe, sufficiently bothersome or prevents you from having sex. Surgery usually isn't recommended until you've had the condition for nine to 12 months and the curvature of your penis stops increasing and stabilizes for at least three to six months.

The type of surgery used will depend on your condition. Your doctor will consider the location of scar tissue, the severity of your symptoms and other factors. If you're uncircumcised, your doctor might recommend a circumcision during surgery.

Depending on the type of surgery you have, you might be able to go home from the hospital the same day or you might need to stay overnight. Your surgeon will advise you on how long you should wait before going back to work — generally, a few days. After surgery for Peyronie's disease, you'll need to wait four to eight weeks before sexual activity.

A technique known as iontophoresis uses an electric current to administer a combination of verapamil and a steroid noninvasively through the skin. Available research has shown conflicting results on penile curvature and erectile function.

Several nondrug treatments for Peyronie's disease are being investigated, but evidence is limited on how well they work and possible side effects. These include using intense sound waves to break up scar tissue (shock wave therapy), stem cells, platelet-rich plasma and radiation therapy. 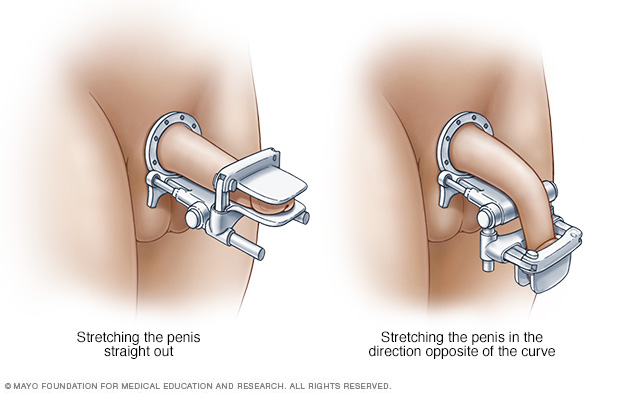 Peyronie's disease can be a source of significant anxiety and create stress between you and your sexual partner.

Here are some tips for coping with Peyronie's disease:

If you have Peyronie's disease symptoms, you're likely to begin by seeing your family doctor or general practitioner. You might be referred to a specialist in male sexual disorders (urologist). If it's possible, encourage your partner to attend the appointment with you.

Preparing for your appointment will help you make the best use of your time.

List questions for your doctor from most important to least important in case time runs out. You might want to ask some of the following questions:

In addition to the questions you've prepared to ask your doctor, don't hesitate to ask questions during your appointment.

Your doctor is likely to ask you a number of questions. Being ready to answer them might reserve time to go over any points you want to discuss further. Your doctor might ask:

Your doctor might also ask you to complete a survey, such as the International Index of Erectile Function, to help identify how the condition affects your ability to have sex.