Prostate cancer is cancer that occurs in the prostate. The prostate is a small walnut-shaped gland in males that produces the seminal fluid that nourishes and transports sperm.

Prostate cancer that's detected early — when it's still confined to the prostate gland — has the best chance for successful treatment. 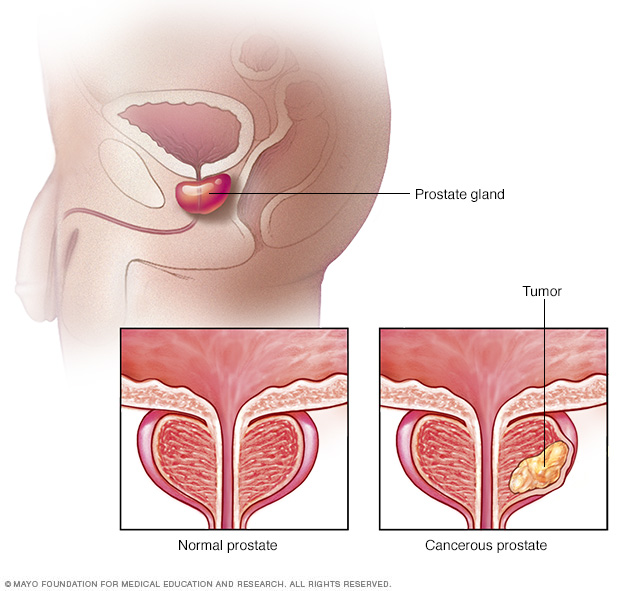 Prostate cancer may cause no signs or symptoms in its early stages.

Prostate cancer that's more advanced may cause signs and symptoms such as:

It's not clear what causes prostate cancer.

Doctors know that prostate cancer begins when cells in the prostate develop changes in their DNA. A cell's DNA contains the instructions that tell a cell what to do. The changes tell the cells to grow and divide more rapidly than normal cells do. The abnormal cells continue living, when other cells would die.

The accumulating abnormal cells form a tumor that can grow to invade nearby tissue. In time, some abnormal cells can break away and spread (metastasize) to other parts of the body. 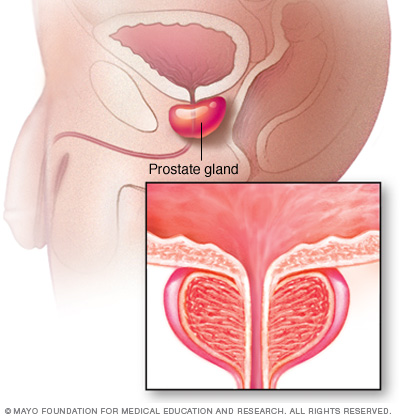 Factors that can increase your risk of prostate cancer include:

Complications of prostate cancer and its treatments include:

You can reduce your risk of prostate cancer if you:

Testing healthy men with no symptoms for prostate cancer is controversial. There is some disagreement among medical organizations whether the benefits of testing outweigh the potential risks.

Most medical organizations encourage men in their 50s to discuss the pros and cons of prostate cancer screening with their doctors. The discussion should include a review of your risk factors and your preferences about screening.

You might consider starting the discussions sooner if you're a Black person, have a family history of prostate cancer or have other risk factors.

Determining whether prostate cancer is aggressive

When a biopsy confirms the presence of cancer, the next step is to determine the level of aggressiveness (grade) of the cancer cells. A doctor in a lab examines a sample of your cancer cells to determine how much cancer cells differ from the healthy cells. A higher grade indicates a more aggressive cancer that is more likely to spread quickly.

Techniques used to determine the aggressiveness of the cancer include:

Determining whether the cancer has spread

Once a prostate cancer diagnosis has been made, your doctor works to determine the extent (stage) of the cancer. If your doctor suspects your cancer may have spread beyond your prostate, one or more of the following imaging tests may be recommended:

Not every person should have every test. Your doctor will help determine which tests are best for your individual situation.

Your doctor uses the information from these tests to assign your cancer a stage. Prostate cancer stages are indicated by Roman numerals ranging from I to IV. The lowest stages indicate the cancer is confined to the prostate. By stage IV, the cancer has grown beyond the prostate and may have spread to other areas of the body. 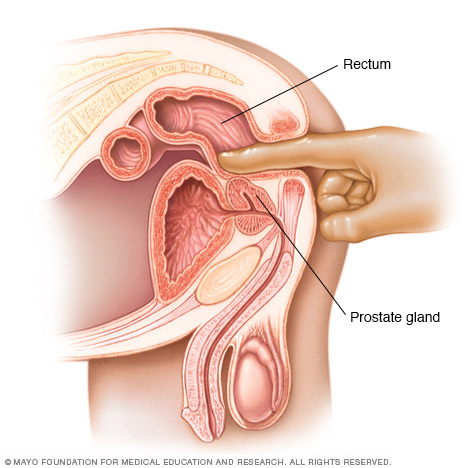 Your prostate cancer treatment options depend on several factors, such as how fast your cancer is growing, whether it has spread and your overall health, as well as the potential benefits or side effects of the treatment.

Immediate treatment may not be necessary

Low-grade prostate cancer may not need treatment right away. For some, treatment may never be needed. Instead, doctors sometimes recommend active surveillance.

In active surveillance, regular follow-up blood tests, rectal exams and prostate biopsies may be performed to monitor progression of your cancer. If tests show your cancer is progressing, you may opt for a prostate cancer treatment such as surgery or radiation.

Active surveillance may be an option for cancer that isn't causing symptoms, is expected to grow very slowly and is confined to a small area of the prostate. Active surveillance may also be considered for someone who has another serious health condition or who is of an advanced age that makes cancer treatment more difficult.

Surgery to remove the prostate

Surgery is an option for treating cancer that's confined to the prostate. It's sometimes used to treat advanced prostate cancer in combination with other treatments.

To access the prostate, surgeons may use a technique that involves:

Discuss with your doctor which type of surgery is best for your specific situation.

In some situations, doctors may recommend both types of radiation therapy.

Ablative therapies destroy prostate tissue with cold or heat. Options may include:

Researchers are studying whether cryotherapy or HIFU to treat one part of the prostate might be an option for cancer that's confined to the prostate. Referred to as "focal therapy," this strategy identifies the area of the prostate that contains the most aggressive cancer cells and treats that area only. Studies have found that focal therapy reduces the risk of side effects. But it's not clear whether it offers the same survival benefits as treatment to the entire prostate.

Hormone therapy is often used to treat advanced prostate cancer to shrink the cancer and slow its growth.

Hormone therapy is sometimes used before radiation therapy to treat cancer that hasn't spread beyond the prostate. It helps shrink the cancer and increases the effectiveness of radiation therapy.

Chemotherapy uses drugs to kill rapidly growing cells, including cancer cells. Chemotherapy can be administered through a vein in your arm, in pill form or both.

Some targeted therapies only work in people whose cancer cells have certain genetic mutations. Your cancer cells may be tested in a laboratory to see if these drugs might help you. 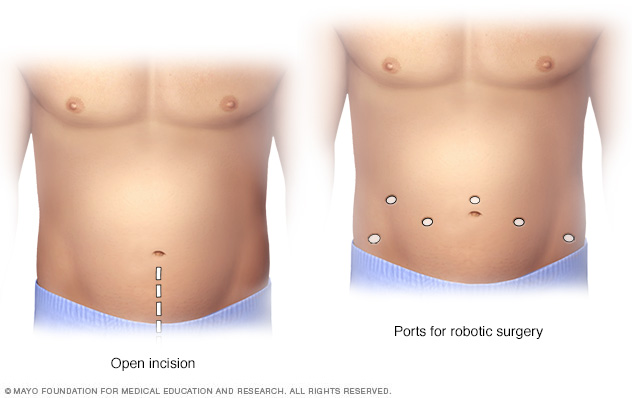 Nearly everyone diagnosed with cancer experiences some distress at some point. If you're distressed, you may feel sad, angry or anxious. You may experience difficulty sleeping or find yourself constantly thinking about your cancer.

Several complementary medicine techniques may help you cope with your distress, including:

Discuss your feelings and concerns with your doctor. In some cases, treatment for distress may require medications.

When you receive a diagnosis of prostate cancer, you may experience a range of feelings — including disbelief, fear, anger, anxiety and depression. With time, each person finds his own way of coping with a prostate cancer diagnosis.

Until you find what works for you, try to:

If you have signs or symptoms that worry you, start by seeing your family doctor.

Because appointments can be brief, and because there's often a lot of information to discuss, it's a good idea to be prepared. Here's some information to help you get ready and what to expect from your doctor.

Your time with your doctor is limited, so preparing a list of questions can help you make the most of your time together. List your questions from most important to least important in case time runs out. For prostate cancer, some basic questions to ask your doctor include:

Your doctor is likely to ask you a number of questions. Being ready to answer them may allow more time later to cover other points you want to address. Your doctor may ask: