Worldwide only a few species of spiders have fangs long enough to penetrate human skin and venom strong enough to hurt humans. Among these are widow spiders, with about 30 species, and recluse spiders, with more than 140 species worldwide.

Typically, a spider bite looks like any other bug bite — a red, inflamed, sometimes itchy or painful bump on your skin — and may even go unnoticed. Harmless spider bites usually don't produce any other symptoms.

Many skin sores look the same but have other causes, such as a bacterial infection.

Bites from some spiders, such as widow spiders and recluse spiders, might cause serious signs and symptoms.

Signs and symptoms of a widow spider bite can include:

Symptoms can last 1 to 3 days.

Signs and symptoms of a recluse spider bite can include:

Severe spider bite symptoms occur as a result of the venom that the spider injects. Symptom severity depends on the type of spider, the amount of venom injected and how sensitive your body is to the venom.

Risk factors for spider bites include living in areas where spiders live and disturbing their natural habitat. Widow spiders and recluse spiders like warm climates and dark, dry places.

Widow spiders can be found throughout the United States, except Alaska, and are more common in the rural South. They're also found in Europe. They are more active in the warmer months and prefer to live in:

Recluse spiders are found most commonly in the southern half of the United States and in South America, where they are known as brown spiders. These spiders are so named because they like to hide away in undisturbed areas. They are most active in the warmer months. Indoors, they prefer to live:

Sometimes they get mixed up in bed linens and clothing, causing many bites to occur in the early morning.

Outside, they seek out dry, dark, quiet spots, such as under rocks or in tree stumps.

Rarely, a bite from a widow spider or recluse spider is deadly, particularly in small children.

A severe wound from a recluse spider can take weeks or months to heal and leaves large scars.

Spiders usually bite only in defense, when being trapped between your skin and another object.

Some clues for identifying black widow spiders include:

Some clues for identifying brown recluse spiders include: 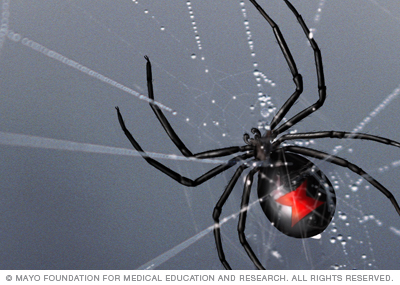 Most spider bites usually heal on their own in about a week. A bite from a recluse spider takes longer to heal and sometimes leaves a scar.

For pain and muscle spasms, your doctor might prescribe pain medicine, muscle relaxants or both. You might also need a tetanus shot.

If a black widow bite is causing severe pain or life-threatening symptoms, your doctor might recommend antivenom, which is usually given through a vein (intravenously). Symptoms usually ease within about 30 minutes of receiving the antivenom. Antivenom can cause serious allergic reactions, so it must be used with caution.

If you've been bitten by a spider that you suspect is dangerous, call your primary care doctor or go to an urgent care center. If your doctor has online services, an option may be to email a photo of the spider to your doctor.

To help your doctor understand your symptoms and how they might relate to a spider bite:

Some basic questions you might want to ask include:

Your doctor is likely to ask you a number of questions. Being ready to answer them might reserve time to go over any points you want to spend more time on. Your doctor might ask: