An ischemic stroke occurs when the blood supply to part of the brain is interrupted or reduced, preventing brain tissue from getting oxygen and nutrients. Brain cells begin to die in minutes.

A stroke is a medical emergency, and prompt treatment is crucial. Early action can reduce brain damage and other complications.

The good news is that many fewer Americans die of stroke now than in the past. Effective treatments can also help prevent disability from stroke.

If you or someone you're with may be having a stroke, pay particular attention to the time the symptoms began. Some treatment options are most effective when given soon after a stroke begins.

Signs and symptoms of stroke include:

Seek immediate medical attention if you notice any signs or symptoms of a stroke, even if they seem to come and go or they disappear completely. Think "FAST" and do the following:

Call 911 or your local emergency number right away. Don't wait to see if symptoms stop. Every minute counts. The longer a stroke goes untreated, the greater the potential for brain damage and disability.

If you're with someone you suspect is having a stroke, watch the person carefully while waiting for emergency assistance.

There are two main causes of stroke: a blocked artery (ischemic stroke) or leaking or bursting of a blood vessel (hemorrhagic stroke). Some people may have only a temporary disruption of blood flow to the brain, known as a transient ischemic attack (TIA), that doesn't cause lasting symptoms.

This is the most common type of stroke. It happens when the brain's blood vessels become narrowed or blocked, causing severely reduced blood flow (ischemia). Blocked or narrowed blood vessels are caused by fatty deposits that build up in blood vessels or by blood clots or other debris that travel through the bloodstream, most often from the heart, and lodge in the blood vessels in the brain.

Some initial research shows that COVID-19 infection may increase the risk of ischemic stroke, but more study is needed.

A less common cause of bleeding in the brain is the rupture of an irregular tangle of thin-walled blood vessels (arteriovenous malformation).

A transient ischemic attack (TIA) — sometimes known as a ministroke — is a temporary period of symptoms similar to those in a stroke. A TIA doesn't cause permanent damage. A TIA is caused by a temporary decrease in blood supply to part of the brain, which may last as little as five minutes.

Like an ischemic stroke, a TIA occurs when a clot or debris reduces or blocks blood flow to part of the nervous system.

Seek emergency care even if you think you've had a TIA because your symptoms got better. It's not possible to tell if you're having a stroke or TIA based only on the symptoms. If you've had a TIA, it means you may have a partially blocked or narrowed artery leading to the brain. Having a TIA increases your risk of having a full-blown stroke later. 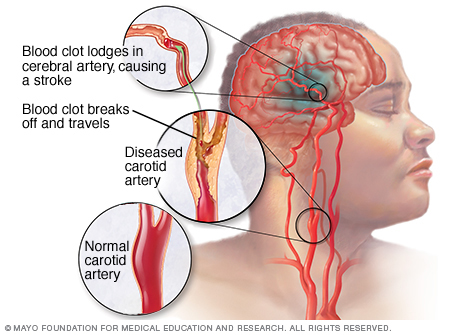 Many factors can increase the risk of stroke. Potentially treatable stroke risk factors include:

Other factors associated with a higher risk of stroke include:

A stroke can sometimes cause temporary or permanent disabilities, depending on how long the brain lacks blood flow and which part is affected. Complications may include:

Knowing your stroke risk factors, following your health care provider's recommendations and adopting a healthy lifestyle are the best steps you can take to prevent a stroke. If you've had a stroke or a transient ischemic attack (TIA), these measures might help prevent another stroke. The follow-up care you receive in the hospital and afterward also may play a role.

Many stroke prevention strategies are the same as strategies to prevent heart disease. In general, healthy lifestyle recommendations include:

If you've had an ischemic stroke or a TIA, your doctor may recommend medications to help reduce your risk of having another stroke. These include:

Things will move quickly once you get to the hospital, as your emergency team tries to determine what type of stroke you're having. That means you'll have a CT scan or other imaging test soon after arrival. Doctors also need to rule out other possible causes of your symptoms, such as a brain tumor or a drug reaction.

Some of the tests you may have include: 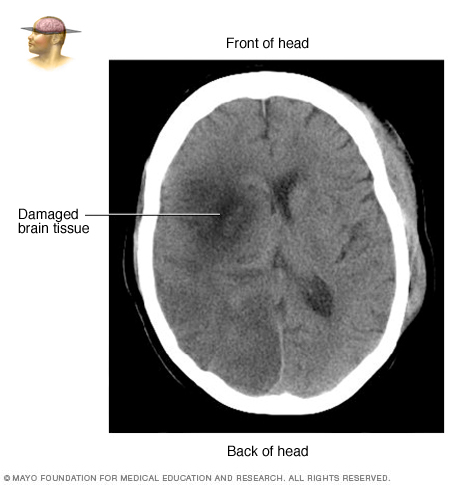 Emergency treatment for stroke depends on whether you're having an ischemic stroke or a stroke that involves bleeding into the brain (hemorrhagic).

To treat an ischemic stroke, doctors must quickly restore blood flow to the brain. This may be done with:

The time window when these procedures can be considered has been expanding due to newer imaging technology. Doctors may order perfusion imaging tests (done with CT or MRI) to help determine how likely it is that someone can benefit from endovascular therapy.

To decrease your risk of having another stroke or transient ischemic attack, your doctor may recommend a procedure to open up an artery that's narrowed by plaque. Options vary depending on the situation, but include:

Emergency treatment of hemorrhagic stroke focuses on controlling the bleeding and reducing pressure in the brain caused by the excess fluid. Treatment options include:

After emergency treatment, you'll be closely monitored for at least a day. After that, stroke care focuses on helping you recover as much function as possible and return to independent living. The impact of the stroke depends on the area of the brain involved and the amount of tissue damaged.

Most stroke survivors go to a rehabilitation program. Your doctor will recommend the most rigorous therapy program you can handle based on your age, overall health and degree of disability from the stroke. Your doctor will take into consideration your lifestyle, interests and priorities, and the availability of family members or other caregivers.

Every person's stroke recovery is different. Depending on your condition, your treatment team may include: 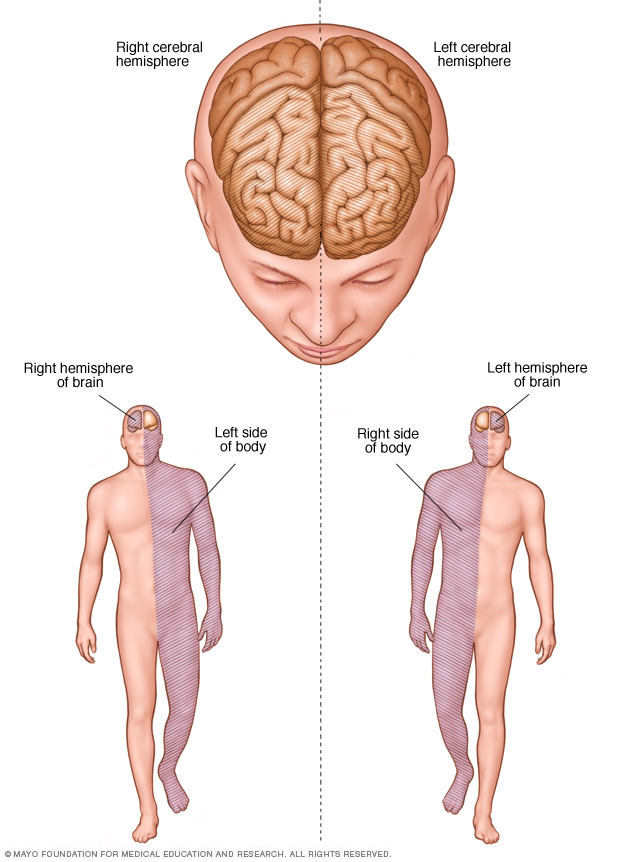 A stroke is a life-changing event that can affect your emotional well-being as much as your physical function. You may sometimes feel helpless, frustrated, depressed and apathetic. You may also have mood changes and a lower sex drive.

Maintaining your self-esteem, connections to others and interest in the world are essential parts of your recovery. Several strategies may help you and your caregivers, including:

Problems with speech and language can be especially frustrating. Here are some tips to help you and your caregivers cope with communication challenges:

A stroke in progress is usually diagnosed in a hospital. If you're having a stroke, your immediate care will focus on minimizing brain damage. If you haven't yet had a stroke but you're worried about your future risk, you can discuss your concerns with your doctor at your next scheduled appointment.

In the emergency room, you may see an emergency medicine specialist or a doctor trained in brain conditions (neurologist), as well as nurses and medical technicians.

Your emergency team's first priority will be to stabilize your symptoms and overall medical condition. Then the team will determine if you're having a stroke. Doctors will try to find the cause of the stroke to determine the most appropriate treatment.

If you're seeking your doctor's advice during a scheduled appointment, your doctor will evaluate your risk factors for stroke and heart disease. Your discussion will focus on avoiding these risk factors, such as not smoking or using illegal drugs. Your doctor will also discuss lifestyle strategies or medications to control high blood pressure, cholesterol and other stroke risk factors.