Tachycardia (tak-ih-KAHR-dee-uh) is the medical term for a heart rate over 100 beats a minute. Many types of irregular heart rhythms (arrhythmias) can cause tachycardia.

A fast heart rate isn't always a concern. For instance, the heart rate typically rises during exercise or as a response to stress.

Tachycardia may not cause any symptoms or complications. But if left untreated, some forms of tachycardia can lead to serious health problems, including heart failure, stroke or sudden cardiac death.

Treatment for tachycardia may include specific maneuvers, medication, cardioversion or surgery to control a rapid heartbeat.

There are many different types of tachycardia. Sinus tachycardia refers to a typical increase in the heart rate often caused by exercise or stress. 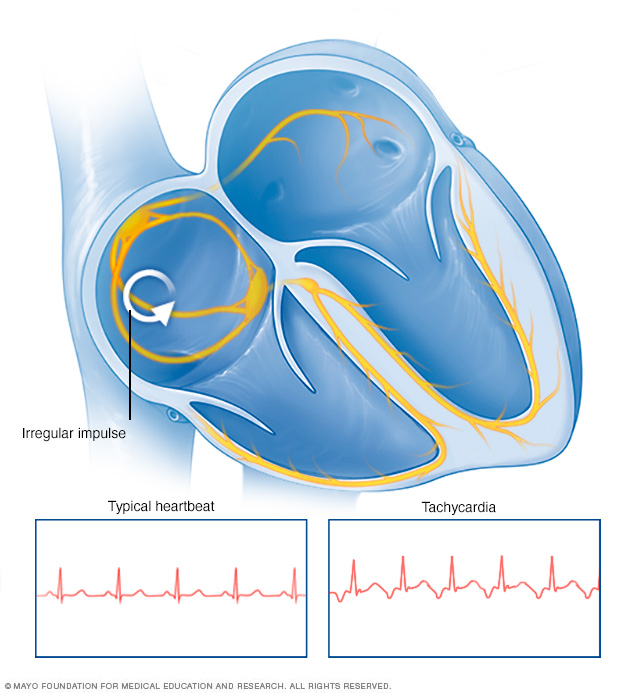 When the heart beats too fast, it may not pump enough blood to the rest of the body. As a result, the organs and tissues may not get enough oxygen.

In general, tachycardia may lead to the following signs and symptoms:

Some people with tachycardia have no symptoms. The condition may be discovered when a physical exam or heart tests are done for another reason.

A number of things can cause a rapid heart rate (tachycardia). If you feel like your heart is beating too fast, make an appointment to see a health care provider.

Seek immediate medical help if you have shortness of breath, weakness, dizziness, lightheadedness, fainting or near fainting, and chest pain or discomfort.

A type of tachycardia called ventricular fibrillation can cause blood pressure to drop dramatically. Collapse can occur within seconds. Soon the affected person's breathing and pulse will stop. If this occurs, do the following:

Tachycardia can also be caused by an irregular heart rhythm (arrhythmia).

Things that may lead to tachycardia include:

Sometimes the exact cause of tachycardia can't be determined.

How does the heart beat?

To understand the cause of tachycardia, it may be helpful to know how the heart typically works.

The heart's rhythm is controlled by a natural pacemaker (the sinus node) in the right upper chamber (atrium). The sinus node sends electrical signals that normally start each heartbeat. These electrical signals move across the atria, causing the heart muscles to squeeze (contract) and pump blood into the ventricles.

Next, the signals arrive at a cluster of cells called the AV node, where they slow down. This slight delay allows the ventricles to fill with blood. When the electrical signals reach the ventricles, the chambers contract and pump blood to the lungs or to the rest of the body.

In a typical heart, this heart signaling process usually goes smoothly, resulting in a resting heart rate of 60 to 100 beats a minute. 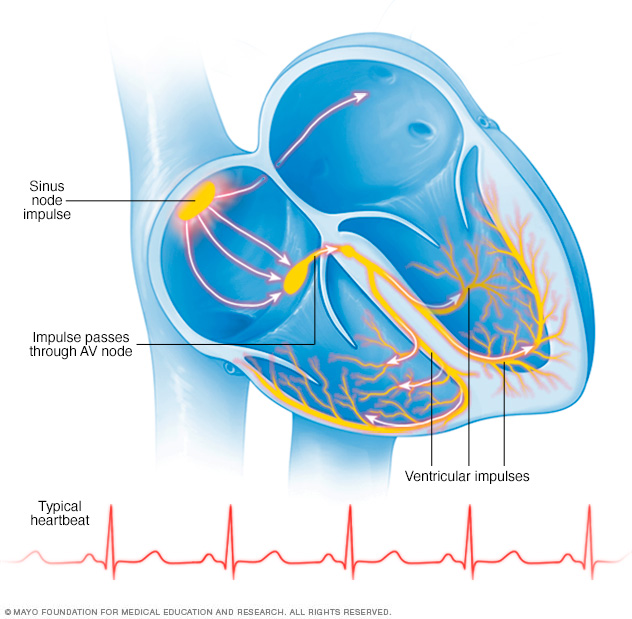 In general, growing older or having a family history of certain heart rhythm problems (arrhythmias) may increase the risk of arrhythmias that commonly cause tachycardia.

Lifestyle changes or medical treatment for related heart or other health conditions may decrease the risk of tachycardia.

Complications of tachycardia depend on:

Some people with tachycardia have an increased risk of developing a blood clot that could cause a stroke (risk is highest with atrial fibrillation) or heart attack. Your health care provider may prescribe a blood-thinning medication to help lower your risk.

Other potential complications of tachycardia include:

Lifestyle changes to reduce the risk of heart disease may help prevent heart arrhythmias that can cause tachycardia. Take the following steps:

To diagnose tachycardia, a health care provider will usually do a physical exam and ask questions about your symptoms, health habits and medical history.

Tests, including cardiac imaging tests, may be done to confirm an unusually fast heartbeat and look for conditions that can cause an irregular heart rhythm (arrythmia). Tests to diagnose tachycardia may include:

The goals of tachycardia treatment are to slow a rapid heartbeat when it occurs and to prevent future episodes of a fast heart rate.

If another medical condition is causing tachycardia, treating the underlying problem may reduce or prevent episodes of a fast heartbeat.

A fast heart rate may correct itself. But sometimes medication or other medical treatments are needed to slow down the heartbeat.

Ways to slow a fast heart rate include:

The treatment of tachycardia involves taking steps to prevent the heart from beating too fast. This may involve medication, implanted devices, or other surgeries or procedures.

If you have tachycardia or any type of heart disease, your health care provider will likely recommend following a heart-healthy lifestyle. Take these steps:

Stress-relief techniques, such as meditation and yoga, might help slow the heartbeat and reduce tachycardia symptoms

If you have a plan in place to manage an episode of a fast heartbeat, you may feel calmer and more in control when one occurs. Ask your health care provider:

If you have tachycardia, you'll likely be referred to a doctor trained in heart conditions (cardiologist).

Basic questions to ask your health care provider include:

In addition to the questions that you've prepared to ask your health care provider, don't hesitate to ask additional questions.