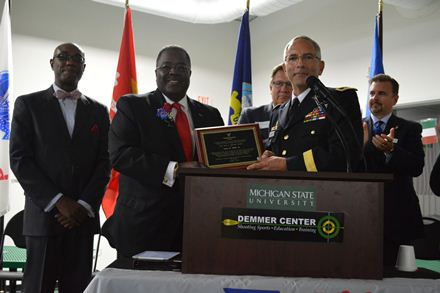 Sparrow Board of Directors member James W. Butler III, a decorated veteran of the Vietnam War, was honored with the 2014 Veteran Tribute and John E. Demmer Award by Volunteers of America Michigan at a private event Thursday, Oct. 2.

“James has long been a good friend of the VOA, whether advocating for veteran services or supporting our efforts to build a medical clinic at our homeless service center,” said Patrick Patterson, Executive Vice President for VOA Michigan. “His community service is so extensive, it’s hard to summarize in a few sentences. He also happens to be a bona fide war hero.”

Butler served as a Platoon Sergeant in the U.S. Army and earned many honors, including the Combat Infantry Badge, Army Commendation Medal, two Purple Hearts and four Bronze Stars, including “V” device for heroism in ground combat.

As a civilian, Butler had a 30-year career with IBM and earned many community and business awards. He formerly chaired the Board of Directors for Sparrow and currently chairs the Physicians Health Plan Board of Directors. He helped spearhead the Sparrow Medical Group VOA practice which serves the area’s homeless. It is believed to be first practice in Michigan based in a homeless service center.

The first VOA Veteran Tribute honoree, John E. Demmer, is a World War II veteran who launched the global business that today bears his name, Demmer Corp. Demmer is a longtime philanthropic supporter of the community and his alma mater, Michigan State University. In honor of its first recipient, the Veteran Tribute award is named the John E. Demmer Award.