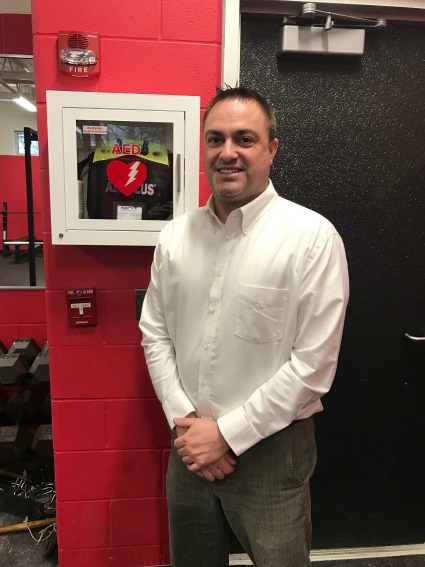 CARSON CITY, MI – The Carson Foundation has granted a life-saving Automated External Defibrillator (AED) to St. Louis High School, where a basketball player collapsed and went into cardiac arrest in December. The boys varsity player was saved after coaches began CPR and called 911, and two officers from the St. Louis Police Department responded with an AED. After the incident, though, school district administrators evaluated the need for more AEDs throughout their buildings and athletic fields. There was an AED at the middle school where the boy was practicing but it was not located close enough to access. The Carson Foundation gave St. Louis High School an AED to use in its weight room, which is a standalone facility in the northwest corner of the school. “The incident with the St. Louis basketball player shows these kinds of emergencies can happen without warning, and how critical it is to have an emergency response plan that includes access to an AED as well as CPR training,” says Carson Foundation Executive Director Shelly Weaver. AEDs are lightweight, battery-operated, portable devices and can be used to treat sudden cardiac arrest in children and adults. The Carson Foundation has purchased AEDs for a number oflocal schools, including Carson City-Crystal, Central Montcalm, Fellow Baptist Academy, Fulton, Ithaca, and Vestaburg. The Carson Foundation is dedicated to keeping healthcare services local so they are available when truly needed. For more information about the Carson Foundation or to make a donation, contact Shelly Weaver at 989.584.0979