LANSING, MI – E.W. Sparrow Hospital Nurse Kelly Kowalski, RN, has been recognized with the DAISY Award for outstanding nursing after delivering extraordinary, compassionate care and leading-edge medicine to a special patient with disabilities.

The patient, who had just been through two surgeries, often will respond to someone only if she feels comfortable with their tone of voice. Kowalski was not only gentle with her, but attentive and kind as she responded to the patient’s needs throughout the night.  “Kelly showed my special needs daughter so much care and compassion,” the patient’s mother said in nominating Kowalski for the award. “She wholeheartedly deserves this!” 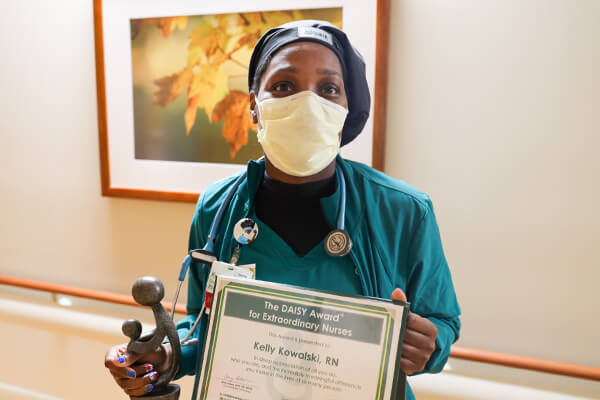 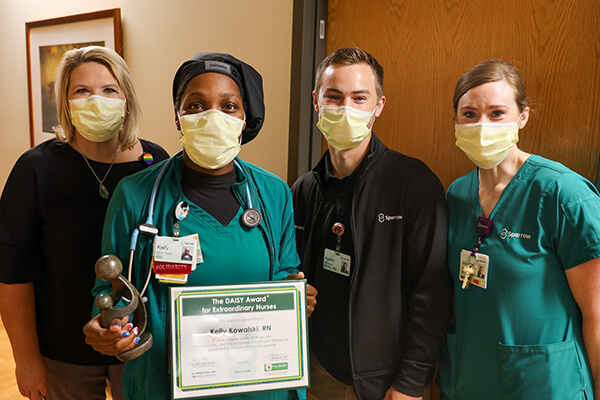 Kowalski became a Sparrow caregiver in May 2021. Since then, the Lansing Community College graduate has been working as a night med/surg float RN, moving from one unit to another as needed.

“Kelly represents a new graduate RN class from last year that dove headfirst into the pandemic. Through it all, Kelly has maintained compassionate and meaningful connections with her patients and their families every night,” said Float Team Manager, Austin Welsh, MSN, RN. “This Daisy Award not only recognizes this instance, but every interaction of super-human and compassionate care Kelly has delivered since entering the profession.”

Kowalski received a certificate of recognition, a DAISY pin to wear at work, and beautiful serpentine stone sculpture carved by the artists of the Shona Tribe in Zimbabwe. The “Healer’s Touch” sculpture depicts the embracing relationship nurses have with their patients.

The DAISY Award is an international program that rewards and celebrates the extraordinary, compassionate, and skillful care given by nurses every day. Nurses are nominated by their patients and patients’ families. DAISY Award nominations are accepted at Sparrow throughout the year.

To learn more about the DAISY Award, go to Sparrow.org/DAISY.

Sparrow Health System is Mid-Michigan’s premier healthcare organization and includes hospitals in Lansing, Carson City, Charlotte, Ionia and St. Johns, as well as Sparrow Specialty Hospital, Physicians Health Plan, Sparrow Care Network, Sparrow Medical Group and the Michigan Athletic Club. Sparrow is affiliated with Michigan Medicine through the Sparrow Children’s Center and with Michigan State University’s three human health colleges. Through these partnerships and the dedication of our 10,000 caregivers, Sparrow pursues a vision to be nationally recognized as a leader in quality and patient experience. For more information, visit Sparrow.org.