Lynne Ash of Bath named August Volunteer of the Month 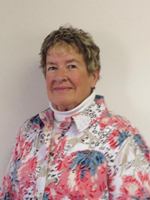 The Sparrow Women’s Board of Managers and the Volunteer Services Department have nominated Lynne Ash of Bath as the August 2014 Volunteer of the Month.

Ash began volunteering in the Emergency Department in 1972 and was there for 12 years.

In 1979, Ash became a member of the Sparrows and continues to work with this group today. She has served as group President and now Vice President for the past 14 years. Ash is the official recorder of individual hours for the group.

Originally from Birmingham, Mich., Ash left her hometown after graduating from Birmingham High School to attend Michigan State University. Ash received her degree in Art Education and, while attending MSU, she met her future husband, Richard. They live in Bath and have two boys, six grandchildren and three great-grandchildren who reside in Arizona.

Ash is described by her peers as reliable and dedicated with a great sense of humor. She has clearly put her degree in art to good use! One of her creative talents is painting the faces on the dolls the Sparrows make.

On her own time, Ash makes porcelain dolls and a type of doll that began in Europe called ‘reborn dolls’ as a hobby. She has also been raising and showing miniature horses for the past 17 years.

It is the sense of doing something for someone else and having a sense of purpose that has kept Ash loving her volunteer work at Sparrow for more than 40 years. With her enthusiasm and love for what she does, Sparrow will have her for many more years to come.

For more information about volunteering at Sparrow, visit Sparrow.org/Volunteer