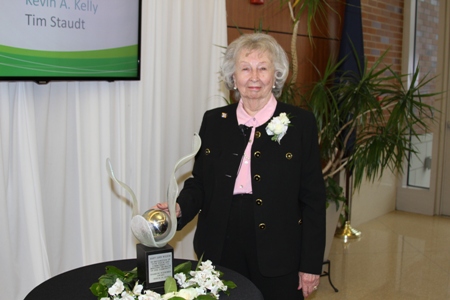 Wilson has served as a Sparrow Volunteer for more than 45 years, and her efforts have been invaluable to Sparrow.

Wilson has served in and chaired numerous Women's Board committees and was Board President. In 1989, Wilson became an Emerita Member of the Women's Board.

"Mary Jane's enduring and enthusiastic devotion to Sparrow and our Patients has had a great impact on our reputation for service and quality," said Dennis Swan, President and CEO, Sparrow Health System. "We are enormously proud to honor such an outstanding Volunteer who has given so much for others over four decades."

Wilson is also active in other volunteer activities throughout the community and has written many books and articles. She is a past President of the Lansing Woman's Club, founding President of the Friends of the Capitol, and founding Coordinator for the Docent Guild for the Michigan Historical Center.

The celebration marks Sparrow's 117th year of service to the mid-Michigan community. Sparrow was founded in 1896 by a group of 114 female volunteers as the Lansing Women's Hospital. In 1912, a new hospital was built at its current site at 1215 E. Michigan Ave., taking the name of Lansing businessman and benefactor Edward W. Sparrow.

For a complete album of photos, visit our Facebook page by clicking here.