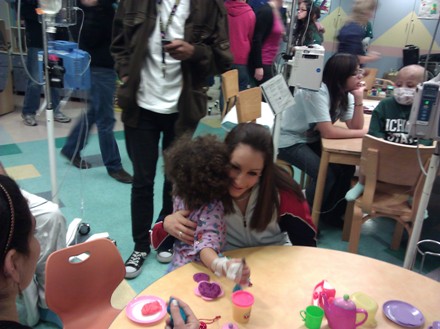 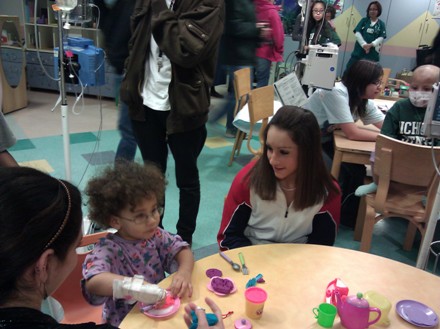 LANSING, Mich. - World Champion gymnast Jordyn Wieber of DeWitt took a break from training for the 2012 London Olympic Games to encourage the young Patients in the Sparrow Children's Center.

Aubrey Soul, 3, was too shy to talk much, but that didn't stop her from giving Jordyn a big hug in the playroom.

"It's very neat," her father Rick Soul said. "It's so cool to see Jordyn taking the time to visit the kids."

She handed out gifts to young Patients in the Children's Center during the visit. Her mother, Rita Wieber, is a nurse in Sparrow's Emergency Department.

"I'm so happy to be here," Jordyn said. "It was just awesome to be here and visit with these awesome kids."

Jordyn will also help promote the Sparrow Children's Center Telethon in June, which raises money for the Center and Children's Miracle Network.

For more than a century, Sparrow has been a leader in caring for children. The first hospital in mid-Michigan to offer a dedicated children's unit, Sparrow today is home to the region's only full-service pediatric emergency department. As the region's Children's Miracle Network hospital, Sparrow is able to provide families the most advanced technology and treatment options in pediatric and neonatal care.