Sparrow to be featured in show on The Discovery Channel 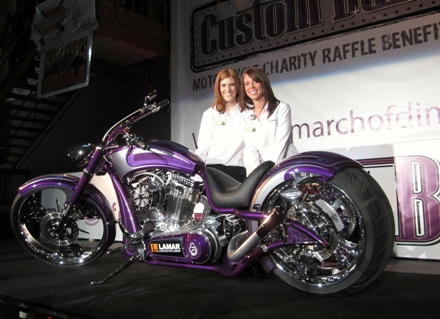 The episodes are scheduled to air March 12 and March 19 and will include footage filmed inside Sparrow Hospital last November. Please check local listings for stations and times.

The show's star, Paul Teutel Jr., known to many as the master motorcycle builder on "American Chopper," visited patients in Sparrow's Regional Neonatal Intensive Care Unit (RNICU), along with his crew of mechanics.

Sparrow Caregivers recently attended an invite-only event in Grand Rapids for the reveal of the custom-theme motorbike built for the show. Teutul and cast unveiled the "street legal" bike set to be auctioned off via an online raffle to benefit the March of Dimes. The bike was commissioned by Lamar Construction of Grand Rapids.

All proceeds will go to the March of Dimes, which funds and provides research vital to the health of mothers and babies throughout the U.S. The March of Dimes works closely with Sparrow to assist infant patients and their families.

The specially trained staff at Sparrow's RNICU uses the latest technology to give the highest risk babies the care they need. The RNICU staff cares for babies experiencing difficulty such as those born prematurely, with birth defects or having trouble breathing.