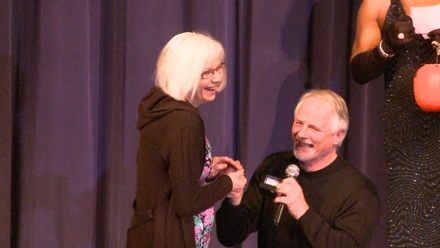 When Sparrow Caregiver Wil Slone decided to propose to his girlfriend Rose Van Schoick he chose to surprise her in front of hundreds of friends, family and colleagues during the recent Caregiver Variety Show.

"It was fun to do that at the Variety Show," said Slone, a plumber in the Engineering Department who performed with his band during the show. "Sparrow feels like my family."

Van Schoick, who serves as the financial secretary for Sparrow's UAW local 4911, is not one to seek the limelight, so Slone said he knew he needed to trick her into coming on stage during the show, held at East Lansing's Hannah Community Center.

He set up a fake door prize drawing, with only one possible winner. When her ticket number was called, she was coaxed on stage and Slone popped out of a prize box with a ring.

"He's forever a jokester," said Van Schoick. "I realized it wasn't a joke when he pulled out the ring."

Van Schoick said yes, and the couple plans to marry this summer.

The Caregiver Variety Show is an annual fundraiser that benefits the Care for the Caregivers Fund, which helps Caregivers who have experienced a major loss, catastrophe, illness, or medical condition affecting their well-being.