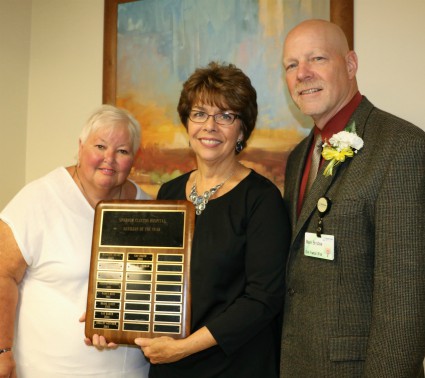 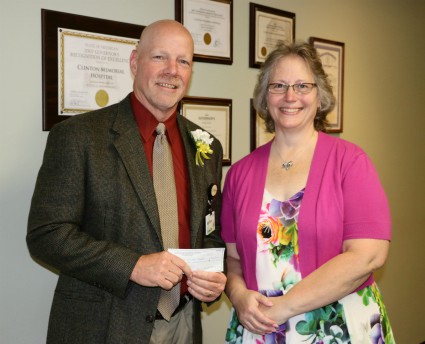 ST. JOHNS, MI – Members of the Sparrow Clinton Hospital Auxiliary have named officers and leaders for the coming year.

Outgoing President Angie Beals was honored during a recent meeting for her service as co-president from 2015-17. Beals also presented Sparrow Clinton Hospital Vice President and Chief Financial Officer Mark Brisboe with a check for $20,000, which goes toward the Auxiliary’s $100,000 pledge to fund construction of the hospital’s Emergency Services Department. The renovated Department is about to celebrate its third anniversary of providing timely access to emergency and trauma care.

Shelley Redman was announced as the 2017 Auxilian of the Year. Redman received special recognition from her peers for her dedication to volunteer leadership and service through Auxiliary projects, as well as her service and leadership with the Michigan Association of Hospital Advocates South West District.

The Sparrow Clinton Hospital Auxiliary breaks for the summer and reconvenes in September. New members are welcome. To learn more about the Auxiliary, call Shelley Gunther at 989.224.6137.