The DAISY Award is an international program that rewards and celebrates the extraordinary, compassionate and skillful care given to nurses every day.

Both nurses were lauded for their professional and positive attitude, and always being willing to help wherever there is a need.

Patients were quick to say how well the caregivers explained what procedures were being done and why.

Hardy, a nurse in Medical/Surgical Department, has worked at Sparrow Ionia since August 2019.  She lives in Carson City with her family.

“Kristi is always upbeat.  She has a wonderful way to help comfort patients while they are here,” said Steve Dexter, BSN, RN, manager of the Med/Surg Dept. 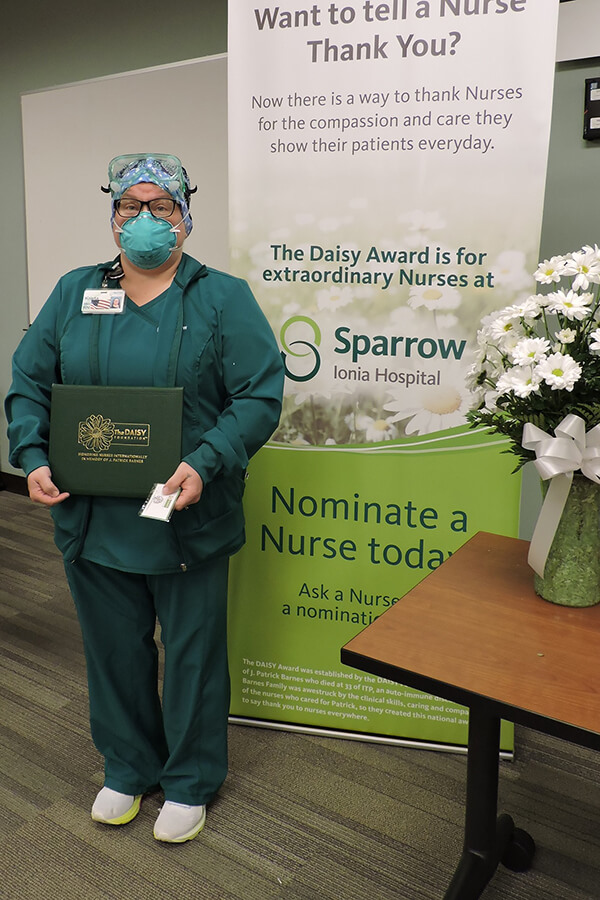 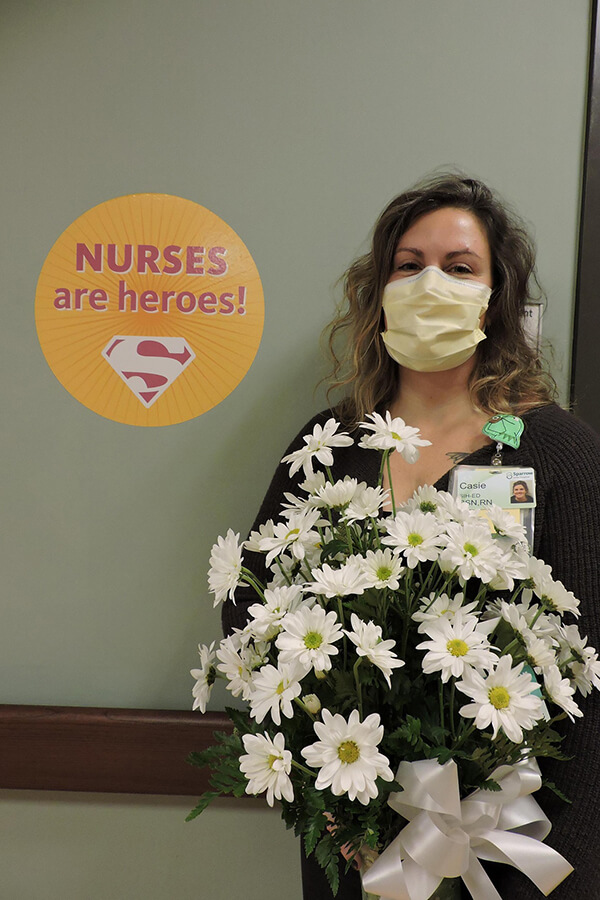 Sparrow Ionia Hospital Emergency Department Nurse Casie Lambert showcases the flowers she received for being honored with the DAISY award for extraordinary nursing.

Lambert, a nurse in Sparrow Ionia’s Emergency Department, was presented the award in a recent ceremony.  She has been employed at Sparrow Ionia since October 2016.  She lives in the Lyons/Muir area with her husband and 3 children.

“Casie is a great nurse who puts her patients’ priorities above her own.  She is very deserving of this, and I am so happy she’s part of our great emergency care team,” stated Tara Lanz, BSN, RN, Emergency Department manager.

DAISY is an acronym for Diseases Attacking the Immune System. The DAISY Award is a national program created in memory of J. Patrick Barnes who died in 1999 of Idiopathic Thrombocytopenia Purpura, or ITP, at age 33. His family was overwhelmed by the skillful and compassionate nurses who cared for him, and the DAISY Foundation and Award were created as an expression of their gratitude.

Hardy and Lambert received a certificate, a DAISY pin, a beautiful stone sculpture called A Healer’s Touch, hand-carved by artists of the Shona Tribe in Zimbabwe. The sculpture depicts the embracing relationship nurses have with their patients.

Sparrow is Mid-Michigan’s premier healthcare organization and includes hospitals in Lansing, Charlotte, St. Johns, Ionia and Carson City as well as Physicians Health Plan, Sparrow Care Network, Sparrow Medical Group, the Michigan Athletic Club, and AL!VE. Sparrow is affiliated with Michigan Medicine through the Sparrow Children’s Center and with Michigan State University’s three human health colleges. Through these partnerships and the dedication of our 10,000 Caregivers, Sparrow pursues a vision to be nationally recognized as a leader in quality and Patient experience. For more information, visit Sparrow.org.