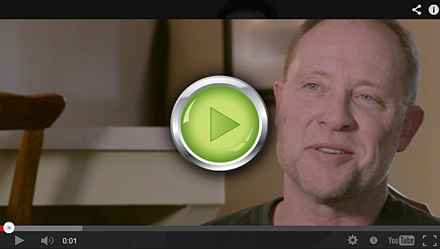 Stomach pain brought Dennis Lundquist, 52, of Lansing, to the Sparrow Emergency Department but Physicians soon discovered he was also suffering from an irregular heartbeat, commonly known as atrial fibrillation, or AFib.

David Rhine, M.D., the cardiac physician on call that night, happens to specialize in treating AFib using a procedure called advanced ablation. Dr. Rhine is with the Sparrow Thoracic and Cardiovascular Institute.

"It must have been fate," says Lundquist.

According to the American Heart Association (AHA), nearly 2.5 million people in the U.S. have atrial fibrillation and are twice as likely to die as those without AFib, and five to seven times more likely to suffer a stroke. Left untreated, AFib can lead to a weakened heart and eventually heart failure, according to the AHA.

"I was tired and had spells when my heart would race, but I didn't put the two together. Looking back, I probably had a year or more of symptoms," said Lundquist.

Lundquist underwent the minimally invasive procedure at Sparrow in which a catheter is fed through a vein to the heart. Dr. Rhine then makes a 3-D map of the heart and identifies the misfiring cells. Once in place, the catheter directs energy to cauterize the short-circuiting areas that cause the AFib.

"Advanced ablation is an effective tool to treat Patients who do not respond to arrhythmia medications, avoids open heart surgery or lifelong dependence on a pacemaker, and offers an improved quality of life," said Dr. Rhine.

"With advanced ablation, we can offer our Patients faster recovery times, less exposure to X-ray radiation, less risk of damage to blood vessels or heart tissue, and a reduced likelihood of additional, more invasive procedures."

Sparrow is also one of only three Michigan hospitals offering Stereotaxis - the most advanced and safest cardiac catheterization technology available - for use with high-risk cases.