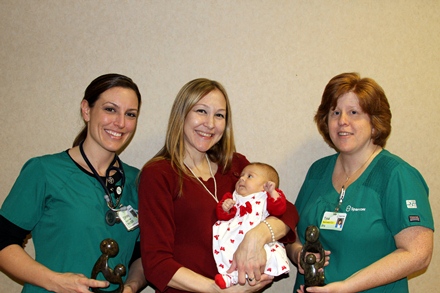 Click here to see our entire photo album.Two Sparrow Nurses were recognized this week for working together to help a Patient see her newborn before her urgent transfer to another facility.

Heather Rosales, was in liver failure and delivered her daughter Quinn at 34 weeks. Quinn weighed in at 3 pounds 11 ounces, and was admitted to Sparrow's Regional Neonatal Intensive Care Unit.

RNICU Nurse Tina Hummel, R.N., and Critical Care Float Nurse Christy Meissner, BSN, R.N., worked together to bring mom and baby together before Heather was transferred to another facility to be evaluated for a liver transplant. Since Heather was intubated, sedated and unable to leave her bed, Christy woke Heather up enough to see her baby before the transfer, while Tina brought Quinn from the RNICU. 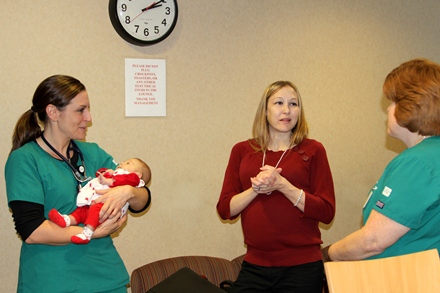 Heather's husband and family got to record the very emotional reunion, leaving everyone with treasured memories, said Heather. The Nurses also brought a doll to Heather to pick up her scent to leave in her daughter's incubator.

Heather and Quinn are doing well and returned to Sparrow to thank Tina and Christy. The two Nurses received the DAISY Award, which is given each month to those who demonstrate Nursing excellence.

Tina and Christy both received a certificate, a DAISY pin to wear at work and beautiful serpentine stone sculpture carved by the artists of the Shona Tribe in Zimbabwe. The sculpture depicts the embracing relationship Nurses have with their Patients. 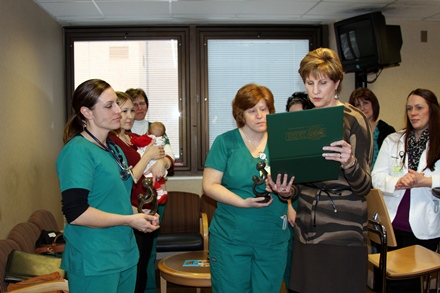