At Sparrow, we strive for early detection and treatment of Sepsis. Nurses screen every adult patient in the Emergency Department, on admission to the hospital, every 12 hours, and as needed for Sepsis.

Sepsis is a life-threatening illness caused by your body's immune system responding to an infection. Sepsis occurs when the body's response to an infection injures its tissues and organs. It may lead to shock, multi-organ failure, and death - especially if not recognized early and treated promptly.

Sepsis can affect anyone however there are some groups at higher risk. People who are immunocompromised such as those on steroids or immunosuppressant drugs, or are on chemotherapy for example, as well as the very young or very old, people who had recent surgery, IV drug users, those with indwelling lines or catheters, women who are pregnant or recently pregnant, and those who are already on antibiotic therapy.

Sepsis and Septic Shock affect millions of people each year. It is the leading cause of death in hospitals across the nation. More than 1.7 million people in the U.S. are diagnosed with sepsis each year, that is 1 every 20 seconds. 270,000 people die from sepsis each year in the U.S., 1 every 2 minutes; this is more than from prostate cancer, breast cancer, and opioid overdoses combined. Those who survive sepsis have a shortened life expectancy, are more likely to suffer from an impaired quality of life, and often experience worsened mental and physical function. 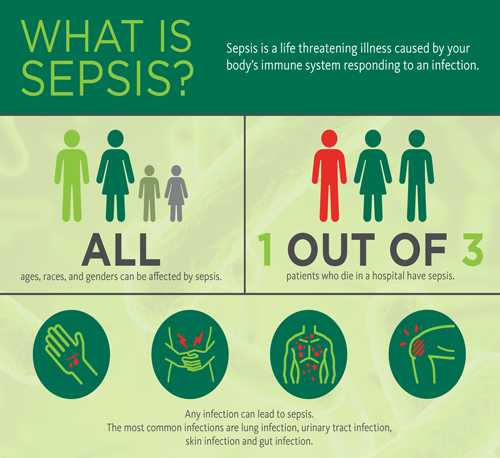 Sepsis is the final common pathway to death from most infectious diseases worldwide, including viral infections such as SARS-CoV-2 / COVID-19. Sepsis is the most common complication observed in severe cases of COVID-19. Recent research reports that hospitalized COVID-19 patients are 22% more likely to develop sepsis than hospitalized influenza patients, and four times as likely to develop severe septic shock.

Sepsis screening is a nurse-driven protocol that uses vital signs and clinical assessment to initiate lab work to assist with early detection of Sepsis.

At Sparrow, when patients meet the screening criteria, a Code Sepsis is activated. It is a teamed approach with phlebotomy, pharmacy, nursing, and providers to help intervene and treat Sepsis rapidly. 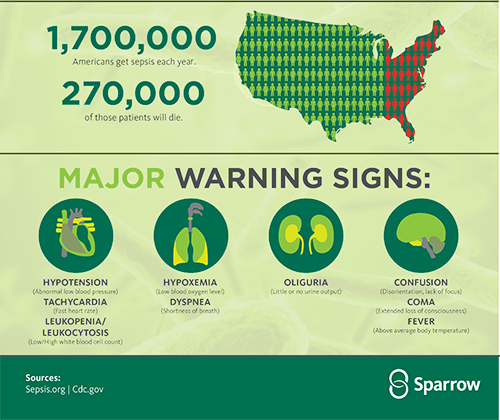 You can help prevent Sepsis by using simple infection prevention practices including washing your hands, keeping cuts clean and covered until healed, getting recommended vaccines, and seeking medical help when you suspect you have an infection.

For more information about Sepsis, you can visit: